Natural disasters and the resulting catastrophe claims were at a four-year high in 2016, according to Aon Benfield. The economic impact of these catastrophes was, globally, two thirds more than in 2015 (Munich RE). Moreover, North America suffered its highest number of natural catastrophes in more than 35 years. While natural disasters are an unavoidable part of the property insurance industry, the resulting catastrophe claims present significant challenges for both P&C insurance carriers and individual adjusters.

Request your copy of our Annual Claims Report.

Without the proper diagnosis and settlement tools, catastrophes can make predicting risk and estimating HVAC damage reserves very difficult for carriers. Additionally, laws that require all claims (even those from a catastrophe) to be processed according to strict deadlines put catastrophe claims at an even greater risk for indemnity leakage. By evaluating claim data from historical catastrophes, carriers can better understand and anticipate the downstream impact of future losses from catastrophes.

For adjusters, catastrophe claims can be an extremely difficult task. Not only are these types of claims physically and emotionally draining, but typically, more claims to investigate often exist than there are hours in a day. However, adjusters cannot simply settle for replacement of all equipment when a repair is viable ― just because they need to close more files. By analyzing data from other catastrophe claims, adjusters can better understand when they might want to bring in an expert to evaluate the HVAC portion of the claim to help them settle expediently and accurately. 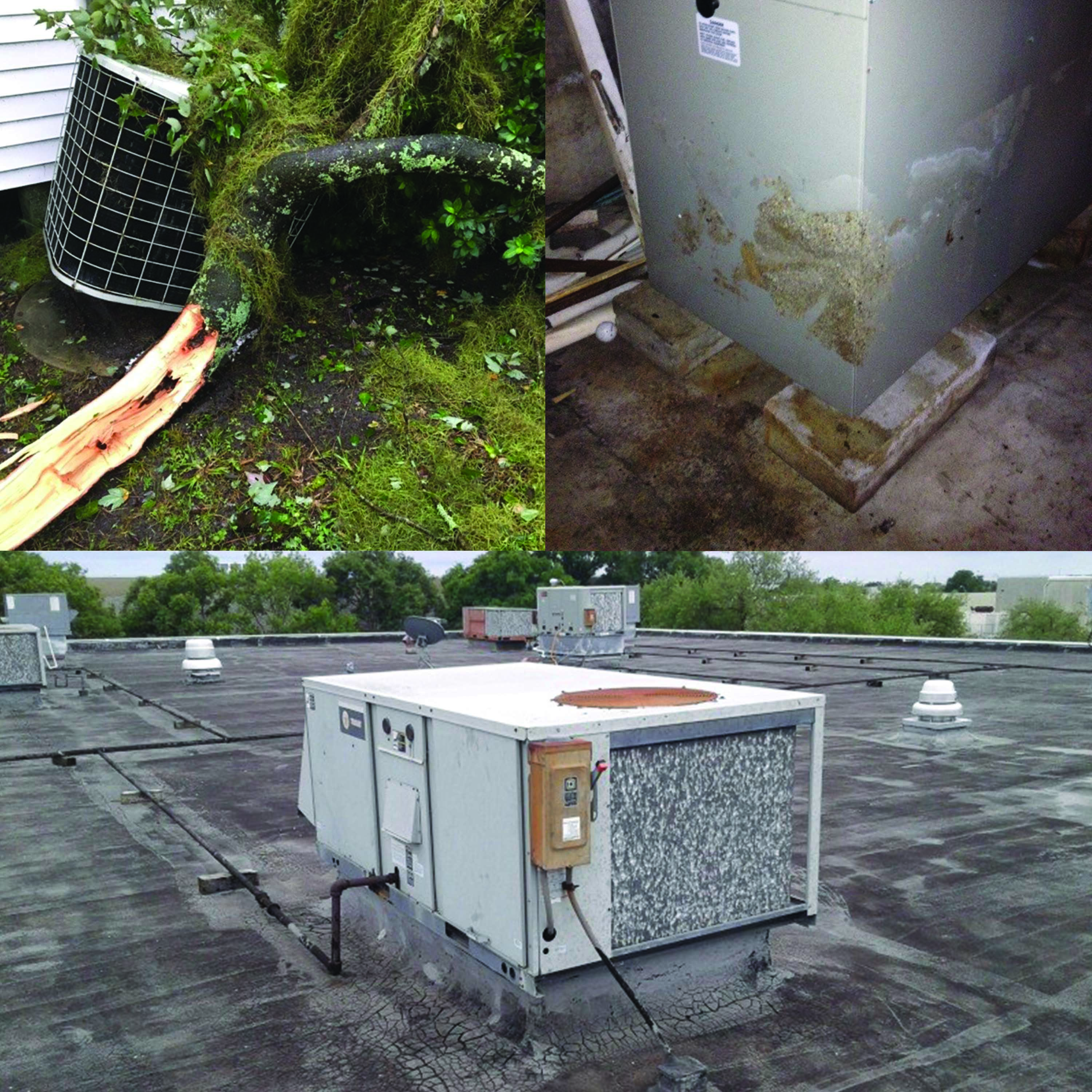 To help P&C insurance carriers and adjusters prepare for and handle catastrophe claims that include HVAC equipment, we have selected three notable catastrophe events from 2016 for analysis: Spring Texas Hailstorms, Louisiana’s August Flooding and Hurricane Matthew.

The months of March and April, 2016, ushered in some of the largest hailstorms on record, resulting in more than $4 billion in property damage in portions of Texas. According to the Insurance Council of Texas, the only collection of storm events with higher damage totals in the history of Texas (across all perils) was Hurricane Ike in 2008. Most of the damage occurred in the Dallas-Fort Worth and San Antonio areas, with some property owners suffering repeat losses between March and April (experiencing hail up to 4.5 inches in diameter). With an estimated $1.36 billion in damage, the April 12 San Antonio storm was the costliest single hail event in Texas history, according to Insurance Journal. 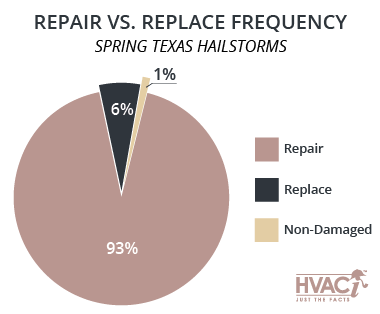 While the 375 Texas hail events in March and April of 2016 were catastrophic, the HVAC systems damaged by hail were largely repairable. 93% of HVAC systems (across both residential and commercial claims) were found to be repairable after HVACi’s onsite assessment. This percentage indicates that, for hailstorm catastrophes, carriers should avoid settling for replacement of HVAC systems without an evaluation from an objective expert.

In August of 2016, devastating floods of historic proportions struck southern Louisiana. The two-day rainfall, which in some areas totaled more than 2 feet, had a statistical likelihood of a less-than-0.1 percent chance in any given year (1,000-Year Rain). These floods led to an estimated $8.7 billion in property damages (The Economic Impact of the August 2016 Floods in the State of Louisiana) and the death of 13 people in five Louisiana parishes (Louisiana’s Mammoth Flooding). 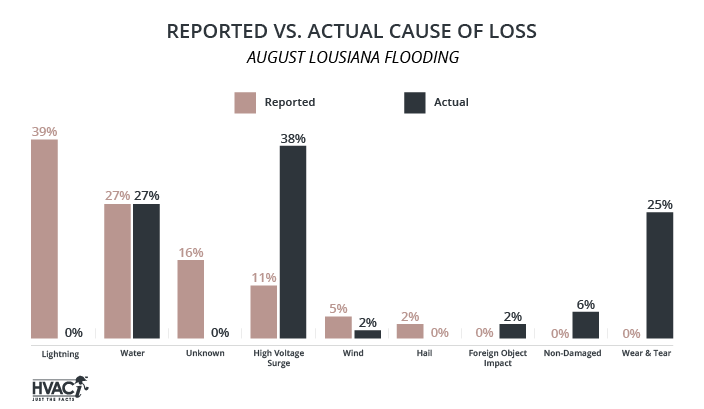 HVACi was enlisted by carriers to assess a wide variety of catastrophe claims because of the flooding in southern Louisiana. Most of these damages were claimed as Water, Lightning or Windblown debris. After a thorough technical assessment, it was determined that 25%  percent of these systems were, in fact, damaged due to age-related Wear & Tear, and 6 percent were in proper working condition at the time of the assessment. This data proves the necessity of determining the actual cause of loss to HVAC equipment, even when it is part of a catastrophe claim or carriers at risk of indemnity leakage.

Hurricane Matthew, which had more of a direct impact on the Caribbean, Cuba and Haiti than the United States, made its way up the coast of Florida on October 7, 2016. By the time it made landfall in South Carolina the next day, Matthew had been downgraded to a Category 1 hurricane. While the wind damage from the hurricane could have been much worse, the storm surge and flooding that ensued devastated the Southeast U.S. coast.

Storm surge caused the tides to rise to levels never recorded in some areas of North and South Carolina (National Weather Service). The worst damage came in the days immediately after the hurricane, with coastal rivers rising to their highest levels since Hurricane Floyd in 1999. Hurricane Matthew resulted in a death toll of 46 in the United States. Air Worldwide estimates the cost to be more than $6 billion, and over 19,600 National Flood Insurance Policy claims were filed (FEMA). 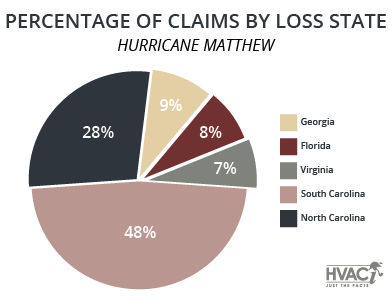 HVACi assessed claims in all five states affected by the hurricane, with the majority of the claims occurring in North and South Carolina. The most frequently claimed cause of loss was Wind damage, followed by High Voltage Surge. After a thorough onsite assessment, 30 percent of the systems were damaged due to age-related Wear & Tear and 5 percent were not damaged at all. This data drives home the need for carriers to utilize an objective expert to determine the cause of loss to HVAC equipment, even when it is part of a catastrophe claim, so as to better control indemnity leakage.

For additional statistics from the three catastrophes analyzed here (along with many other property claim trends), request a copy of HVACi’s 2017 Annual Claims Report.