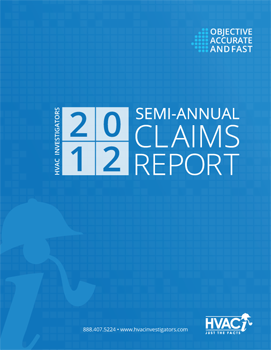 CHARLOTTE, N.C., Oct. 30, 2012 – HVAC Investigators (HVACi), an established market leader providing insurance carriers across the country with heating, ventilation and air conditioning (HVAC) damage assessments, recently published its 2012 semi-annual claims report. Distributed to insurance carriers across the country, the report revealed several compelling statistics across a multitude of HVAC industry trends that can help carriers make more informed decisions on their specialty HVAC and refrigeration claims. The report is free and available at request by emailing annualreports@hvacinvestigators.com. The next report is scheduled to be released in the first quarter of 2013 for all 2012 claims data.

Critical topics covered in the report, including reported damage versus actual damage; recommended settlement actions; repair versus replace frequency; repair action by category; and frequency of claims by geographic region, were closely analyzed following thousands of claims investigations across the United States, providing an accurate representation of HVAC property and casualty claims, year to date.

“The results were staggering.  The data clearly suggests that HVAC claims require consistent and accurate findings,” said Matthew Livingston, HVAC Investigators’ business development manager. “Because of the complexity of HVAC claims, and the technical expertise required to accurately diagnose true cause of damage, it can be difficult for carriers to settle those claims consistently without outside assistance.”

Highlights of the Claims Report:

No claim researched was originally reported as “wear and tear” or “claim withdrawn/not damaged”. However, following a field investigation, more than 38% of all HVAC claims were found to be in one of these two conditions.

The average claims accuracy per residential claim was $3,859 and $21,109 per commercial claim for the first half of 2012. The average variance per claim, when multiplied by the number of HVAC claims received by a typical property and casualty insurance carrier, will result in claims accuracy in excess of $37,000,000 in any given year.

Nearly nine out of every 10 claims investigated by HVACi resulted in a repair recommendation to bring the insured back to pre-loss condition.

HVACi’s specific repair action varies by the type of damage sustained by the HVAC equipment. Lightning, hail and vandalism are the three most common types of reported claims, and were sub-categorized to include minor, moderate and major repairs as well as misreported/not damaged and full replacement. In every case, the frequency of minor or moderate repairs is significant while looking at all recommended repair actions.

Frequency of Claims by Geographic Region

Consistent with historical reporting trends, the number of HVAC claims in the southeast accounted for largest percentage of total HVAC claims for 2012 YTD with 25%, immediately followed by the southwest and north central regions at 16% and 14% respectively.

HVAC Investigators is the nation’s leading provider of data and inspections on HVAC property insurance claims. The company provides timely inspections and actionable reports to help settle HVAC claims more quickly and with a higher degree of accuracy. For more information, or to submit an assignment, visit HVACinvestigators.com or call 888.407.5224.