The following article on “Hail Damage to HVAC Condenser Coils”, written by Matt Livingston of HVAC Investigators, originally appeared in the Technical Notebook Column of Claims Magazine and was also published on Property Casualty 360.

Now that we’ve made it through another winter, it’s time to turn our focus to spring weather patterns and the claims that often result from this change of season. One of the most prevalent causes of loss this time of year is damage due to hailstorms. Hail causes billions of dollars of damage each year, and can have a significant impact on HVAC systems. Whether on the roof or on the ground, portions of both residential and commercial HVAC systems are located outside, and are therefore in the direct “line of fire” during a hailstorm event.

Hail can be especially troublesome when it comes to large commercial properties, which often include dozens (if not hundreds) of rooftop units. According to HVACi’s 2017 Annual Claims Report, 84 percent of large loss claims (those with claimed HVAC damage totaling over $100,000) were submitted for hail damage and resulted in an average claimed amount of $343,243 per claim. The financial significance of these claims (whether commercial or residential) underscores the importance of knowing what to look for when handling hail claims.

The HVAC component most susceptible to hail damage is the condenser coil, which facilitates the transfer of heat from the refrigerant to the outside air. Traditional tube and fin coils (the most common variety) comprise two material layers. The inner layer consists of a tube, typically constructed of copper (but occasionally made of aluminum). The outer layer of the coil is covered with soft aluminum “fins,” commonly layered in vertical strips, which are exposed to the outer walls of a condensing/packaged unit, and thus, vulnerable to a potential hail event. 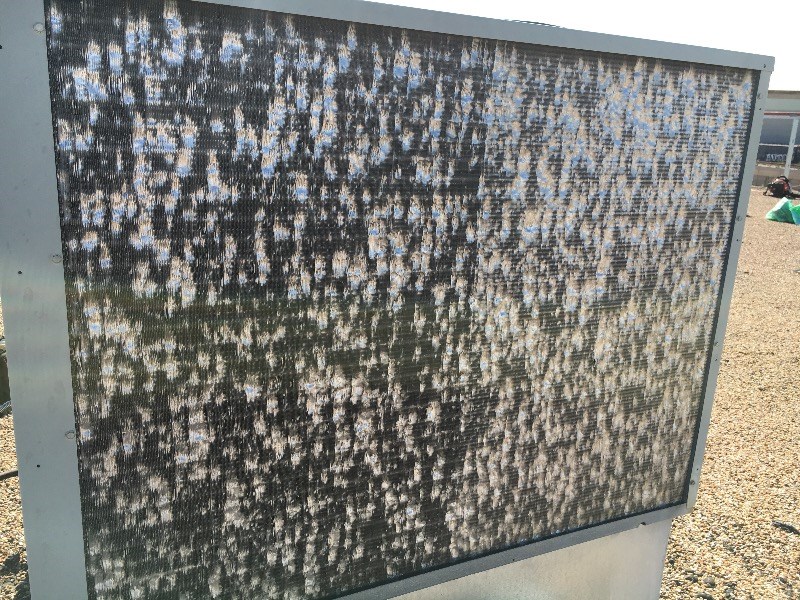 Rooftop packaged unit on a with major hail damage to the condenser coil.

The coil’s fins are constructed out of thin aluminum to provide a large surface area to conduct the heat transfer in an efficient manner. However, this thin aluminum is easily malleable, allowing it to be bent and dented when impacted by objects such as hail. If the fins are flattened by hail (or by some other foreign object), airflow through the condenser coil can be reduced, and may affect the ability of the coil to transfer heat.

Without sufficient protection, these traditional tube and fin coils are highly susceptible to hail damage, but not every hail event requires full system replacement. If the soft fins are merely dented and not torn, it is likely that careful use of a fin-combing tool can rectify the damage and restore the system to pre-loss condition. If the fins are torn by the damage, however, the condenser coil cannot likely be restored through combing, and the coil (if available) would require replacement.

An increasingly popular alternative to the tube and fin coil is the microchannel condenser coil. This newer, more efficient design is constructed entirely out of aluminum, and uses a single layer construction. With this type of coil, refrigerant flows through flat tubes containing small refrigerant channels, while angled and louvered fins between the tubes (rather than around) facilitate heat transfer.

The rigid construction of these coils makes them less susceptible to minor hail damage, but also makes them more difficult to repair, should the damage be severe enough to bend the fins. And unlike traditional coils, microchannel coils cannot be combed, and would generally require replacement under comparable damage scenarios.

What to look for when assessing hail damage claims

Determining the scope of repairs required to return an insured to pre-loss condition is just one part of the hail claim equation. The critical question (particularly for large loss hail claims) is this: Are all of the systems in fact damaged? In 2016, 19 percent of systems with claimed hail damage were found to be non-damaged after an independent onsite assessment.

Once system damage has been confirmed, adjusters must also determine whether the condenser coil was in fact damaged by hail, and if so, what repair action is required to return the system back to pre-loss condition. 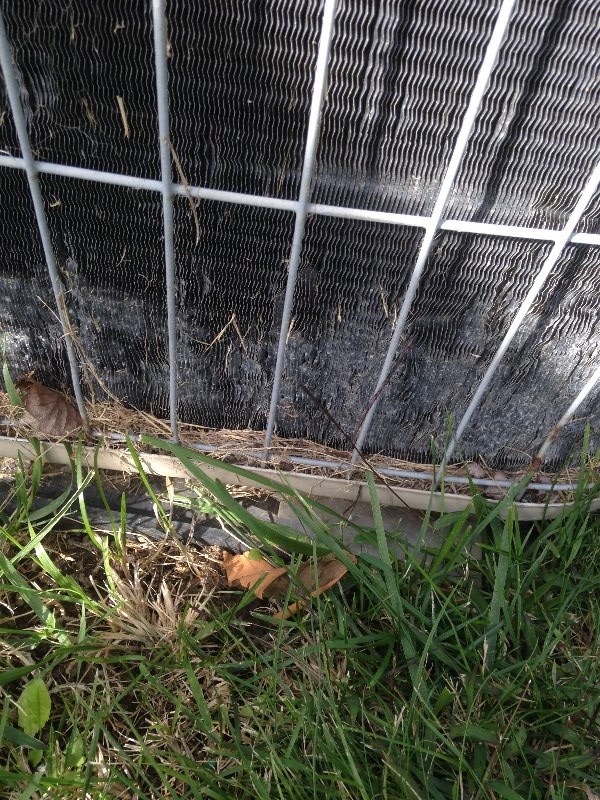 Condenser coil damaged by a weed eater, claimed as hail.

Other causes of loss disguised as hail

Although hail is a commonly reported cause of loss, field investigations often reveal other sources of damage to condenser coils. Statistics show that nearly three out of 10 systems with claimed hail damage in 2016 were actually damaged by some other cause, and in many cases by another foreign object.

One common cause of loss for ground-mounted HVAC systems is impact from landscaping equipment, such as lawn mowers and weed eaters. This type of damage is typically located near the bottom of the condenser coil and occurs in a linear, horizontal pattern. Another common type of foreign object distinguishable from hail is damage from pressure washing the condenser coils (improper maintenance). In this loss scenario, a significant portion of the surface area of the coil is flattened, usually in a wide-streaked, vertical pattern. Another common source of damage comes from direct human contact due to system installation, roof maintenance or vandalism.

Hail damage to an HVAC system’s condenser coil can be prevented. Hail guards, which can be factory-configured or installed via aftermarket distributors, provide a protective layer over the easily-damaged aluminum fins, with minimal impact to the system’s efficiency. And while hail guards certainly increase the overall cost of an HVAC system, the return is usually well worth the avoidance of thousands of dollars in settlement expense that accompany hail (or other foreign object) damage.

Hail poses a real and ever-present threat to insureds’ HVAC systems. Insurance professionals would be wise to educate themselves on the trademark signs of hail damage, and learn how to distinguish hail from other causes of loss. It’s a wise investment. 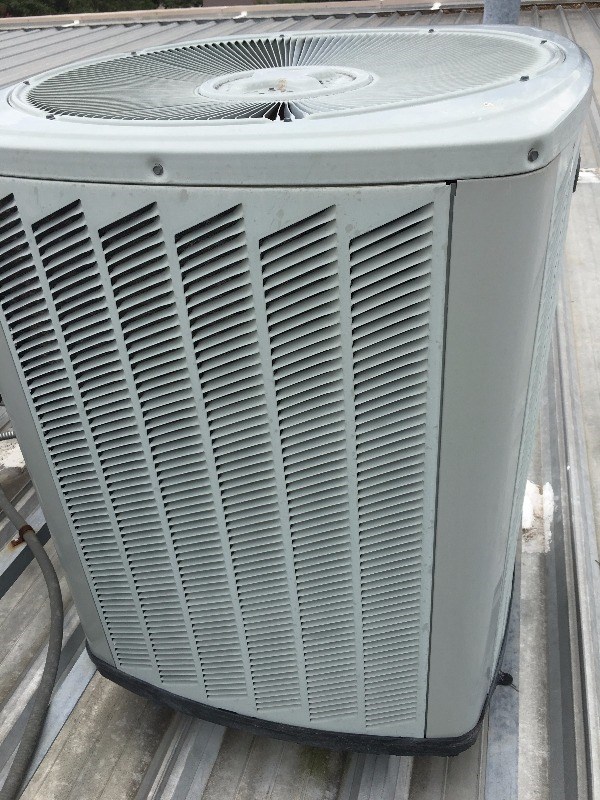 Condensing unit with hail guards that protected the condenser coil from damage.

Need more information on hail damage? Check out some of our other resources: