The following article on “HVAC Compressor Damage: Lightning or Wear & Tear”, written by Matt Livingston of HVAC Investigators, originally appeared in the Technical Notebook Column of the July 2017 issue of Claims Magazine and was also featured on Property Casualty 360. 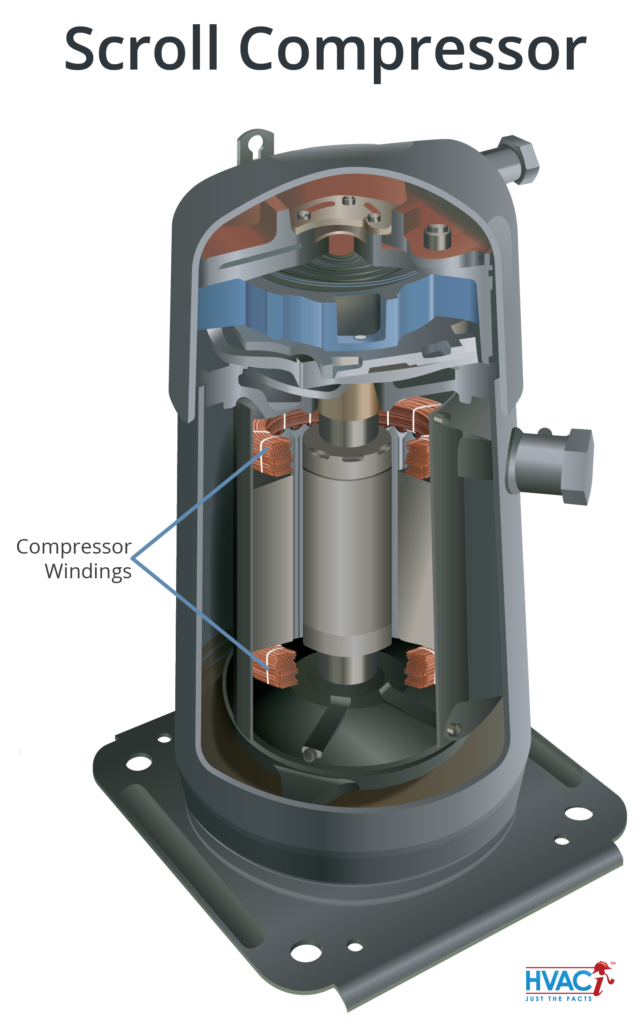 In the summer months, when severe weather is most prevalent, property carriers see an increase in claims for lightning damage to HVAC equipment, and most often to the compressor. While lightning damage does frequently occur this time of year, HVAC compressor damage due to lightning is commonly misdiagnosed. More often than not, an HVAC claim that is originally reported as damaged by lightning is ultimately found to have suffered damage due to some other cause of loss.

No matter the time of year, one of the most common culprits of compressor failure is mechanical damage due to age-related wear and tear. In fact, nearly 43% of all compressors (regardless of how the damage is initially reported) fail due to this cause of loss.

Regardless of application (refrigeration or HVAC) or building type (residential or commercial), the primary purpose of a compressor is to draw low-pressure refrigerant vapor from the evaporator, compress that vapor, and prepare the refrigerant for heat removal in the condenser. Residential compressors typically operate on single phase alternating current (AC), and thus require a capacitor to assist in both starting and running the compressor while energized.

Considered the “heart” of the HVAC system, the compressor is not only critical to proper system function, but can often be impossible to repair and expensive to replace. Moreover, without understanding the root cause of compressor failure, the simple act of replacing this component may not ultimately resolve the overarching issue. When handling HVAC claims, it is critical to understand what caused the compressor to fail before agreeing on a scope of repair for settlement. 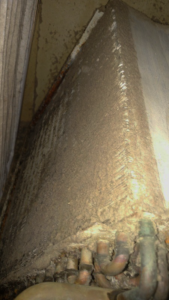 A major cause of damage to a compressor is mechanical failure, and a major contributing factor is a lack of system maintenance, such as not changing the indoor air filters or allowing dirt and debris to build up on the outdoor condenser or indoor evaporator coils. Such negligence can lead to excessive stress on the compressor, and may cause it to overheat and “burn out” prematurely.

Another reason for mechanical failure is improperly sized equipment or failure to follow system repair best practices. An oversized metering device (commonly called a Thermostatic Expansion Device or TXV) at the evaporator coil may allow more refrigerant to enter the evaporator than can be vaporized, causing a floodback of refrigerant to the compressor, wearing out the compressor’s bearing surfaces and accelerating its failure.

If the refrigeration line is breached (intentionally or as a result of a leak), great care must be taken in performing system repairs. If the filter-drier is not replaced, and proper steps are not taken to evacuate and purge the refrigeration system, moisture or contaminants may create acid in the system, possibly leading to premature compressor failure. 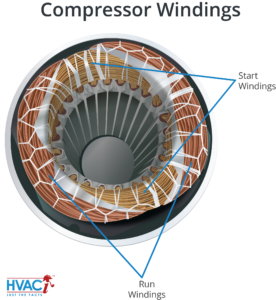 Like traditional single-phase motors, single-phase compressors contain both “start” and “run” windings, which are a series of copper wires wound around the stator, and which cause the motor to turn when energized by electricity. As the names imply, the start winding is engaged to start the compressor, while the run winding is in use for the duration of compressor operation.

The continuity of these windings is critical to compressor operation, and can be tested using an ohmmeter to determine the health of each. Common winding damage includes “open windings” or “shorted windings.” Open windings indicate that there is a break in the windings, while shorted windings indicate that the two windings are either making contact with one another or with the shell of the compressor itself. Either type of winding damage can be caused by a voltage imbalance or by mechanical failure…neither of these circumstances alone indicates lightning or wear and tear.

If a singularity of overvoltage occurs from a lightning or power surge event and causes a break in one or both windings, typically other components (such as the fan motor or capacitor) are also damaged. If open windings are found and the compressor is the only electrical component damaged, this is likely the result of a mechanical failure that caused the compressor to overheat.

Compressor windings can also become shorted by lightning. This is more commonly observed in older compressors, where even small increases in voltage can cause significant damage to winding insulation and lead to shorts. Again, in these cases, the compressor will likely not be the only component damaged since the event will have also affected other electrical components. 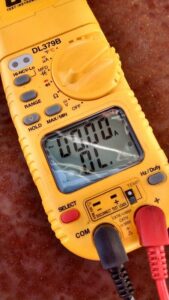 An ohmmeter indicating that the windings of the compressor are open

There is no single defining “symptom” that can indicate with absolute certainty whether an HVAC compressor was damaged by lightning, a high-voltage surge, or simply by age-related wear and tear. Only by gathering all the evidence (visual, measured and corroborative), can we accurately determine what caused the loss and the best course of action that should be pursued to return the system to pre-loss condition.