Less Common Commercial HVAC Systems Adjusters Should Be Familiar With

Most commercial policyholders use package units and split systems; however, other types of HVAC systems are prevalent in claims. Among them are exhaust fans, chillers, and make-up air units. It’s important adjusters know a little about each type of HVAC system – even less common ones – to ensure the most accurate settlement decisions.

According to the CCG IQ 2020 Annual Report, exhaust fans were the third most frequently claimed system type. They are found in commercial kitchens, offices, manufacturing, and warehouse buildings and are used to remove stale air, cooking odors, and excessive moisture or heat. Among their advantages are ventilating a space to provide fresh air, improving air quality for a healthier atmosphere indoors, and removing moisture to prevent mold growth.

Exhaust fans operate by a motor turning either fan blades or a blower wheel, depending on the type, to pull contaminated air out of the building. Belt driven units rely on a belt to connect the fan or blower to the motor. In a direct drive unit, the motor is connected to the fan blades or blower wheel by a shaft or axle, and the blades rotate with the motor.

Downblast exhaust fans, left, are best for applications unrelated to cooking; whereas, upblast exhaust fans trap grease remnants left in the air so they don’t cause damages to equipment or the roof.

Policyholders may use an upblast or downblast exhaust fan, depending on their needs. Upblast exhaust fans are ideal for spaces with commercial kitchens, including restaurants or hotels. Air is blown out of the top, and, more importantly, a sealed compartment protects the motor from the heat, moisture, and contaminants being removed. Additionally, a secondary grease trap captures condensed grease to prevent it from getting onto the roof.

Among the predominant causes of loss are hail, wind, and smoke and fire; however, almost a third of the exhaust fan systems were in proper working condition at the time of assessment.

Chillers are commonly used in airports, hospitals, hotels, shopping malls, restaurants, temporary structures, and industrial or medical facilities. They transfer heat out of a space using water or a water solution instead of air. Policyholders may have water-cooled or air-cooled chillers; however, the initial process is the same.

Warm water enters the evaporator unit from the primary return coming from the building’s Air Handler Units (AHUs) and its heat is transferred to the refrigerant. The now cooler water is then pumped by a water pump through the primary supply back to the AHU. A blower and the ductwork bring in air from the facility, and the water absorbs its heat. The now cooler air is supplied back to the conditioned space through the ductwork. This process is similar to that of a traditional HVAC split system or package unit. The warmer water then returns to the evaporator to restart the process. 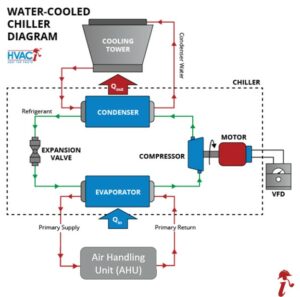 The processes for how water-cooled and air-cooled chillers work are almost identical except for the method used to transfer heat from the refrigerant.

Despite the complex processes, chillers may be preferred over traditional split systems and package units because water conducts heat 25 times better than air. Each chiller type also has advantages. Water-cooled chillers are better at conducting heat, are more consistent, and are best for medium to large facilities, though they require a stable water supply and a lot more maintenance. Air-cooled chillers, which are better for small to medium facilities, have lower installation costs, less maintenance, and require less space.

Among the perils affecting chillers are corrosion and poor maintenance, which are linked with wear and tear, as well as electrical problems caused by wear and tear or high voltage surges.

Make-up air units provide tempered fresh air into spaces that have a lot of mechanical ventilation taking air out.

Make-up air units are typically used in industrial or other similar commercial applications, such as restaurants, warehouses, or distribution centers. These are areas where more ventilation is required to improve air quality and protect health. If too much air has been exhausted by mechanical means and isn’t replaced, the space can become depressurized. Having a make-up air unit deliver fresh air can restore the pressure and balance and contribute to the overall Indoor Air Quality, which may be part of a local, state, or federal regulation.

Predominant causes of loss for make-up air units are hail, wind, and high voltage surge. Make-up air units are most frequently included on hail claims if they are on the roof. But since they don’t have any coils and have strong metal cases, they typically aren’t damaged by hail. Adjusters should make sure they aren’t settling for non-damaged equipment.

Due to the complexity of commercial HVAC systems, carriers can benefit from expert evaluations. HVACi is the nation’s leading provider of HVAC and Refrigeration damage assessment services for insurance carriers. Our team uses its HVAC system knowledge and experience to enable adjusters and insurance personnel to confidently settle claims based on data-driven testing, actionable reports, and prompt cycle times.

Dealing with a claim that has an HVAC system you aren’t familiar with? Submit a claim to receive cause of loss, scope of damage, and repair and replacement recommendations to return your policyholder’s system to pre-loss condition quickly and fairly.