The following article on “Thermal Fatigue in HVAC Heat Exchangers”, written by Matt Livingston of HVAC Investigators, originally appeared in the Technical Notebook Column of Claims Magazine and was also published on Property Casualty 360. 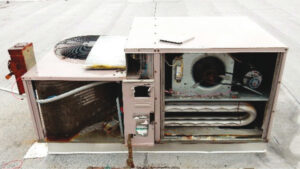 It’s hard to believe, but winter is just around the corner, and with it comes a new wave of HVAC claims.

A common failure that aging HVAC systems suffer in fall and winter months is the breakdown of the heat exchanger due to thermal fatigue.

To some degree, all metals that are repeatedly heated and cooled are subject to thermal fatigue, a cyclic stress that weakens the metal to an eventual point of failure. The degree to which metals are affected by thermal fatigue includes such stressors as: how often the metal heats and cools, how quickly the temperature of the metal changes, and the composition of the metal.

When metal fails due to thermal fatigue, it most often occurs when the metal is hot, and presents itself in the form of a crack, which grows and deepens over time.

One HVAC component particularly susceptible to thermal fatigue is the system’s heat exchanger.

These are found in every gas- or oil-fired split system or packaged unit application, and they provide an efficient method of transferring the heat created by the burners to the supply air, while segregating the combustion gasses from the air itself. 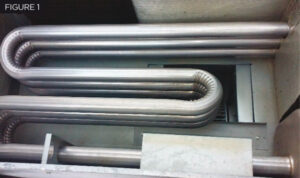 As seen in Figure 1, the typical heat exchanger comprises several metal tubes wrapped in a serpentine fashion that are connected on one end with the system’s burners and combustion chamber, and on the other end to a vent or exhaust flue. As the supply air is pushed by the blower across the heat exchanger tubes, the heat transfers away from the heat exchanger to the passing air, following the second law of thermodynamics.

Heat exchanger cracks can range in size from small, almost imperceptible fissures, to gaps wider than a half inch or more. And when heat exchangers do crack, the failure not only results in increased claim settlement amounts (due to the costly effect of the failure), but may also introduce toxic gasses into the insured’s supply air. 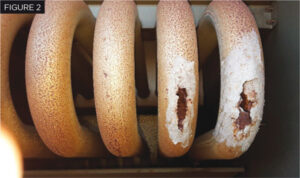 Such was the case with one commercial rooftop packaged unit installed in 1986, which suffered heat exchanger failure due to a lack of routine system maintenance and age-related wear and tear (see Figures 2 and 3).

In this case, the elbows of the heat exchanger tubes had been subjected to a combination of moisture, corrosion and repeated heating and cooling, and thus began to rust and deteriorate over time.

The tubes ultimately failed at this elbow location (a common failure position found during field inspections), and the air being supplied to the commercial building was contaminated by the exhaust fumes. 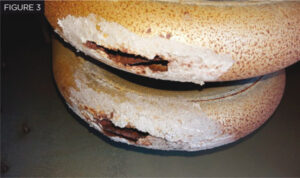 Unfortunately, the heat exchanger crack was not immediately discovered by the insured, exposing unwitting tenants with a steady supply of toxic air.

Only after repeated flame rollouts (which were attributed to the pressure changes caused by the holes in the heat exchanger tubes) melted the system’s control wiring — which led to total system failure — was the true scope and effect of the failure recognized.

The insured was fortunate, in fact, that the flame rollout did eventually cause the system to fail. Had the system controls not been destroyed, the supply air would have continued to be polluted with toxic fumes. These toxic fumes could have included carbon monoxide, which can cause illness or even be fatal.

Because of the age of the HVAC system, a replacement heat exchanger was not available for purchase from the manufacturer or from local distributors. Thus, full system replacement was required to restore the insured to pre-loss condition.

In many cases, even if a compatible heat exchanger is available, the cost of materials and labor required to disassemble and reassemble the system to execute the repair would nevertheless lead to a recommendation to replace a split system or packaged unit in its entirety.

Eventually, all HVAC heat exchangers succumb to thermal fatigue. How quickly they fail depends on how often they’re used, and how well they are maintained. And regardless of coverage, the effect of this failure on HVAC claim settlements makes this topic critical for adjusters to understand and appreciate, as it very often results in a significant and costly restoration.