When Malfunctioning Furnaces Are Less Likely To Be Covered

The following article on “When Malfunctioning Furnaces Are Less Likely To Be Covered,” written by Jay Dykstra of HVACi and StrikeCheck, was originally published on Property Casualty 360.

The Weather Channel has predicted a shift to colder weather in the northern part of the country this month. That, combined with a milder fall, could have had policyholders turning their heaters on and off the last few weeks, and they may notice it not working as well.

Different heating sources, including furnaces, heat pumps and boilers, maintain insureds’ preferred temperatures in the cooler months. The most frequently used is a furnace, which is a type of forced air system and can be part of a split system. Expensive repair or replacement estimates send policyholders scurrying to file insurance claims; however, adjusters should know traditionally non-covered losses are likely the cause for many furnace damages.

Reasons a furnace may malfunction

A furnace uses fairly simple processes. The insured sets the temperature on the thermostat, then a heat source warms the air directly or through a heat exchanger. The most common heat source is natural gas; however, policyholders may use oil-burning furnaces. Other less common heating sources are propane or the use of electric heating elements instead of fuel. The heated air blows through the ductwork to supply registers throughout the property.

Any issues with the components could cause the system to not operate as designed and lead to a claim.

Furnace components all work together to maintain preferred temperatures, but if one malfunctions, the policyholder may file a claim for a loss that shouldn’t be covered.

Cracks in the heat exchanger

The most common furnace failure is a cracked heat exchanger. Rusted or corroded areas may result in holes or cracks. Thermal fatigue can also cause the metal to deteriorate and crack from constant changes from heating to cooling. These circumstances are signs of long-term damage – often from age-related wear and tear or a lack of maintenance, which insurance policies don’t typically cover.

At least two types of clogs may occur in a furnace that can sometimes lead to severe damages, and both are often due to a lack of proper maintenance.

A clogged burner full of dirt, dust, fuel residue, rust or corrosion can cause a misfire. The heat exchanger could then receive excess fuel, depending on the type of system. A clogged or cracked fuel nozzle could also allow incorrect amounts of fuel to enter the system.

Excess fuel could cause a puffback, which is when unburned fuel builds up within the heat exchanger and ignites, resulting in a pushback of soot or oily smoke to be dispersed into the supply air or ductwork. Oil-burning furnaces are more susceptible to this event.

Puffbacks in furnaces and boilers have at least seven known causes, but almost all of them link back to wear and tear or improper maintenance.

A clogged oil nozzle from a lack of maintenance allowed unburned fuel to enter the heat exchanger, which resulted in a messy puffback.

Furnaces may not work as well if policyholders have forgotten to regularly change air filters. Dirty and clogged filters can reduce airflow, making it feel like the furnace isn’t functioning properly. Worse, a clogged filter could cause the furnace to work harder to circulate heated air. This could decrease the system’s lifespan or speed up wear and tear.

A faulty ignition switch could cause ignition to occur at the wrong time or not at all, which may lead to fuel buildup in the heat exchanger. If a policyholder thinks their furnace isn’t powering on, they may attempt to manually reset it too many times, which could cause a fuel accumulation resulting in a puffback. A complete evaluation would determine the accurate cause of loss to see if it’s a covered peril.

Policyholders may think their furnace isn’t working correctly; however, it could be a problem with the furnace’s thermostat. As an electrical component, it can sustain damage from a high voltage surge. Simply replacing the thermostat could return the equipment to pre-loss condition. If a furnace is cycling between on and off modes when it isn’t supposed to, this could be a sign of a thermostat problem or a clogged filter.

Before settling for replacement equipment, adjusters should confirm the scope of the damage.

A new thermostat could be all the policyholder needs to return the heating system to pre-loss condition.

Damages caused by a malfunctioning furnace

When a furnace isn’t working properly, it could lead to other more dangerous consequences. Puffbacks may not be a covered loss, but the damage that results from the release of soot into the property might be.

Another consequence of an improperly working furnace is the release of carbon monoxide due to incorrect venting or a leak. This is a serious health and safety threat if policyholders don’t have proper carbon monoxide detection. Evaluations can determine if the cause of loss was related to wear and tear or something else. 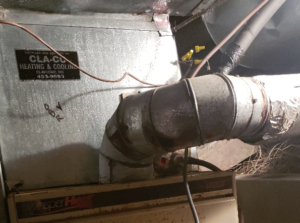 This furnace flue pipe had a carbon monoxide leak caused by age-related wear and tear.

Fires can also be a consequence. Furnace components that could cause a fire include fuel lines, gas connections, or electrical connections.

Lastly, if the furnace isn’t working properly to heat a space, domestic water supply lines could freeze. This sometimes leads to extensive and costly water damage.

Don’t leave claims up to chance

Furnaces have a lot of components that could potentially malfunction and cause problems for a policyholder. Adjusters shouldn’t guess about how to handle the claim. Doing so could lead to unnecessary settlements for damages caused by a non-covered peril or for replacements of systems that could have been repaired.

As the temperatures dip and furnace claim numbers rise, be mindful of the potentially non-covered losses that could occur.

Get My 7 Causes of Puffbacks Guide