Policyholders can heat and cool their properties in a more efficient way by letting the Earth’s natural subsurface temperatures do most of the work. These systems use a geothermal heat pump and geothermal loops buried below the frost line to condition warmer and cooler air through heat transfer. Because they aren’t as prevalent as other traditional heating and cooling systems, adjusters should understand how these systems work for when they wind up in claims. 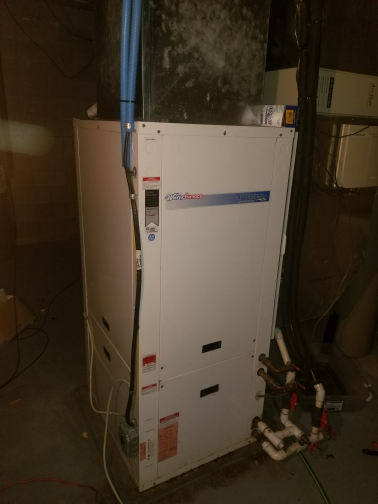 Geothermal systems have underground pipes and a heat pump to use the Earth’s temperature to warm and cool a home or business.

Traditional furnaces and boilers require burning oil or gas in a combustion chamber, but this isn’t necessary in a geothermal system. The Earth maintains a constant average temperature between 50-60 degrees Fahrenheit 20-30 feet underground regardless of weather and temperatures at the surface. This gives geothermal systems the advantage that the amount of energy needed to condition air to be warmer or cooler is roughly the same year-round versus a traditional HVAC system working harder depending on the outside temperatures.

To warm a facility, the fluid inside the geothermal system’s pipes, including water, refrigerant, or antifreeze, increases temperature from the warmer underground rock, soil, or water. A heat exchanger transfers the heat from the fluid to the building’s heating system to warm the air, and the now-cooler fluid returns to the ground to be warmed again. To cool a structure, the heat is taken out of the building and the fluid in the pipes expels the heat while underground.

According to the U.S Department of Energy, geothermal systems can reduce energy consumption by 25-50% compared to traditional air source heat pumps, and geothermal heat pumps reach efficiencies of as much as 600% on the coldest nights. Other advantages of geothermal systems are that they are quieter, have a longer lifespan, and need little maintenance.

Geothermal systems are more expensive, costing around $15,000; however, policyholders will likely recoup that cost in energy savings over the lifespan of the system. Plus, tax credits are possible. A tax credit expired in 2016, but it was reinstated in 2018 and was retroactive. It initially offered 30% of the amount the owner spent to install it, but the tax credit decreased to 26% in 2020 and will decrease to 22% in 2021. After that, the federal tax credit is scheduled to expire unless Congress approves to extend or renew it.

What Types of Claims Will You See This In?

Property characteristics affect where or how geothermal systems may be installed, but they can be used in commercial and residential properties.

Residential systems can be placed on single or multi-family lots, including under lawns or driveways. Homes built with a traditional HVAC system can be retrofitted for geothermal systems using installed ductwork.

Commercial properties may also benefit from the geothermal system’s cost-effectiveness, energy efficiency, and the fact they are more environmentally friendly. It has been used in schools, high rises, government buildings, apartments, and restaurants as well as for agricultural and industrial facilities.

What Are the Different Types of Geothermal Systems?

Two distinct differences in the types of geothermal systems are whether they are closed or open loop and what they are buried in.

Closed loop systems typically have the geothermal loops, which can be plastic pipes, buried in the ground or under water. The fluid inside continuously circulates. A heat exchanger transfers heat between the refrigerant in the heat pump and antifreeze in the pipes. A variation to this is the direct exchange where the refrigerant circulates through copper tubing underground without a heat exchanger and a larger compressor is needed; however, many government regulations prohibit refrigerant being underground because of potential environmental impacts.

Closed loops can be buried horizontally or vertically. Horizontal loops may be more cost-effective for residential properties, particularly for those with enough land. Pipes buried vertically may be better for commercial buildings because the systems would be larger scale, but less land and landscaping are impacted. The holes can be drilled 100-400 feet deep and the pipes are connected at the bottom with a U-bend pipe.

A geothermal system doesn’t always have to be buried in land. A similar process can be completed under water, which may make it the least expensive option. The pond or lake must have an adequate supply so that the pipes can be 8 feet under the surface where water won’t freeze.

Open loop systems require well water or surface water because that is used in place of heat exchange fluid. Instead of being continually used, water returns to the ground as surface discharge once it leaves the building. However, the water supply must be maintained, and policyholders must adhere to discharge rules that are created and enforced by local ordinances, codes, covenants, or licensing requirements.

A hybrid system that uses both underground geothermal systems and an air source heat pump is also possible, and it’s particularly effective in places where cooling is needed more than heating.

Why Do These Systems Fail? 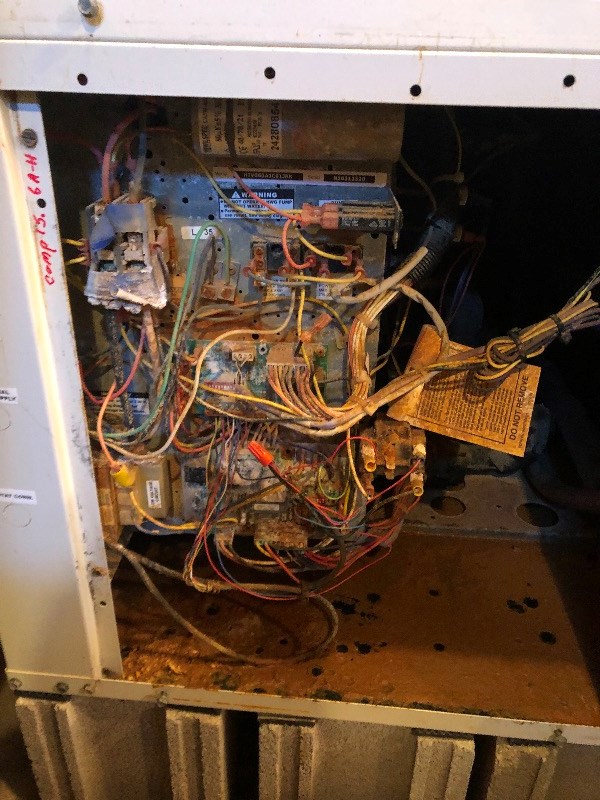 A sump pump failure caused severe water damage to this geothermal system by corroding some of the equipment.

Energy efficiency and longer lifespan are advantages to having a geothermal system, but they do sustain damages like any other system type.

Leaks from the pipes could cause refrigerant to go underground or in the water source. Any water contamination could be harmful to plants or the water supply. This is particularly important in open loop systems, which should be filtered and free from debris.

Another potential concern is the heat exchanger coils could become corroded and stop the component from exchanging heat.

HVACi assessed hundreds of geothermal systems that appeared in property insurance claims in 2019. High voltage surge and wear and tear were the most frequent cause of loss; though, other perils included smoke and fire, freezing conditions, water damage, and unauthorized modifications. In many claims, the system was found to be in proper working condition at the time of assessment.

The average repair cost for geothermal systems claims assigned to HVACi was $1,261 compared to the average total replacement cost of $14,092.

When Should You Get Help Assessing a Geothermal System?

It’s important to always have an expert assess equipment that you aren’t used to dealing with. Most geothermal system claims that were assigned to HVACi were filed with a stated unknown cause of loss. Our staff used their knowledge and experience with these systems to find actual cause of loss and make recommendations for repairs or replacements based on findings. Submit a claim to learn more about our process in supporting insurance carriers and adjusters in handling these and other claims related to HVAC systems accurately, fairly, and quickly.