An Introduction to Evaporative Coolers

Evaporative coolers are a popular alternative to traditional refrigerant-based air conditioning units in regions with hot, dry climates. While they are not seen as frequently as traditional split systems and package units, adjusters should still make themselves familiar with this type of equipment, particularly if they handle claims in regions that are ideal for evaporative coolers.

What Is Evaporative Cooling? 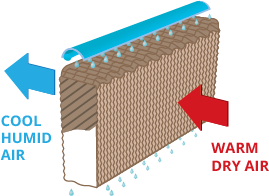 The concept of evaporative cooling has been around for thousands of years. The ancient Egyptians used this process to provide cooling by soaking fabric in water and hanging it across the door to the home. As the air passed through the fabric, it absorbed moisture and created a cool breeze in the space (How Stuff Works).

Get your copy of our Evaporative Cooler Claim Guide here 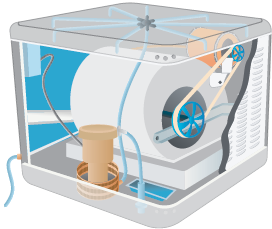 How Do Evaporative Coolers Work?

Evaporative coolers harness this process to provide cooling to a space. Residential properties typically utilize a direct evaporative cooler. In this type of system, a pump circulates water from a reservoir to saturate a cooling pad. A fan then pulls air from the outside through the wet pad, initiating the evaporation process. The cool, humid air is then distributed to the home.

There are three common types of direct residential evaporative coolers:

Where Are Evaporative Coolers Effective?

Traditional air conditioning systems use a coil filled with refrigerant to transfer heat, provide cooling, and remove humidity from a conditioned space. This type of cooling system is a closed process, where the air from the room is cycled back through the cooling process. Allowing air to escape from the conditioned space will reduce the efficiency of the system. 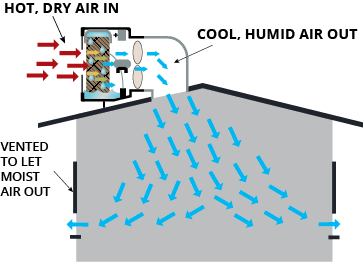 Instead of using refrigerant, an evaporative cooler uses a pump to circulate water to the pads and a fan to pull air through the pads. This adds moisture to dry air and therefore requires the space to be ventilated so the moist air has a way out. Evaporative coolers do not always use ductwork to direct the airflow, but when they do, the ducts must be larger than traditional air conditioners to account for greater flow of air from the evaporative cooler.

Evaporative coolers require frequent maintenance. The cooling pads need regular cleaning or replacement to avoid air quality issues and odors. This should be done as often as once per month when the evaporative cooler has been running constantly. Additionally, sediment and minerals can build up inside of the cooler. These need to be drained and cleaned at least once per season to keep the system working year after year. These tasks can become tedious, particularly when the system is mounted on the roof. 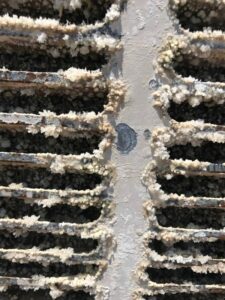 The regions that are best for evaporative coolers tend to have a high propensity for hailstorms. Because evaporative coolers are often located on the roof, they are frequently included in a hail claim. Unlike condensing units, these systems do not have a coil that can be easily damaged by hail. Often, the unit shows no signs of damage from a hailstorm. However, large hailstones can dent the metal panels of the unit. While this does not generally affect the system’s operation, it still must be considered to sufficiently return the insured’s system to pre-loss condition. Luckily, these panels can typically be replaced as opposed to replacing the entire unit. 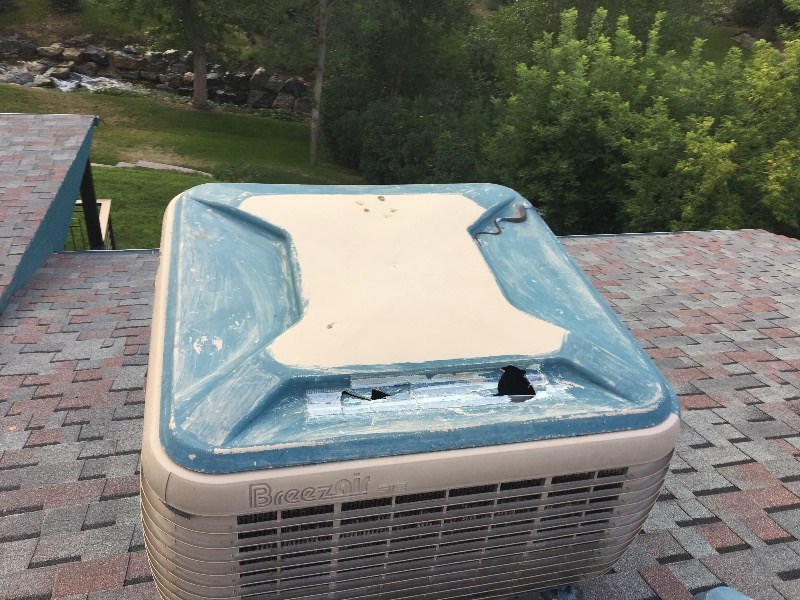 Hail broke through the top panel of this evaporative cooler, the top panels required replacement to return the insured to pre-loss condition

While evaporative coolers are not as popular as the more traditional HVAC systems, adjusters (particularly those who handle claims in the western half of the country) should know what to look for when handling this type of unit on a claim. For more information on evaporative coolers, get your free adjuster guide here.

If you have a residential or commercial evaporative cooler claim that you need assistance with, submit your new assignment here.