The Usual Suspects of Compressor Failures 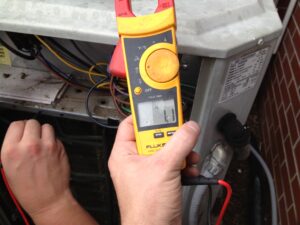 With the unseasonably warm Winter season working its way through the new year and into February, Spring is just around the corner. And with the pleasant temperatures of the new season comes another not-so-pleasant one: lightning storm season. In the past here at HVACi we have seen an increase in claims submitted for lightning damage during the Spring and Summer months, specifically for damages to compressors in HVAC condensing units. More often than not, however, the actual cause of damage in these instances is NOT lightning! There are many other potential causes for compressor failures and we are here to help you understand what those causes might be.

There are seemingly endless ways that a compressor can “go bad” but for this article we’ll stick to the Usual Suspects: High Voltage Surge, Overheating, Contamination, and Refrigerant Floodback.

High Voltage Surge is a very frequent culprit in damaging the compressor. The prolonged electrical imbalances of voltage and currents often results in a failure of the compressor. Another cause for compressor failure is Overheating. This occurs regularly for reasons such as air in the system that raises pressures and temperatures, lack of suction cooling, and lack of regular maintenance. Contamination also can destroy a compressor. Acid is created when air, moisture, and debris from the atmosphere mix with the system’s refrigerant. Exposure to the acid can quickly destroy many internal components within a condenser, including the compressor. Finally, Refrigerant Floodback is another common reason for compressor failure. This happens when refrigerant gets into the compressor’s cylinder and causes pressures within the compressor to skyrocket, resulting in broken parts within it.

These are the usual suspects for compressor failure, and they are much more likely to occur than lightning. In 2012, 41% of all claims we received were reported as lightning damage. Following a thorough investigation, less than 20% of those claims actually sustained lightning damage. A lightning claim being authenticated as actual lightning damage is nearly as likely as your actual chances of getting struck by lightning (not really, but you get the point).

If you’ve seen the classic movie “The Usual Suspects”, you’ll understand why we refer to lightning as the “Kaiser Soze” of compressor failures.