Storms are related to thousands of HVAC system claims filed each year. Adjusters should verify cause of loss and scope of damage before settling for replacement equipment or assuming all damages are linked to reported weather events.

Below are 5 claims that adjusters assigned to HVACi that demonstrate the importance of expert evaluations to guarantee accurate claim resolutions.

1. Not All Claimed Equipment Was Damaged 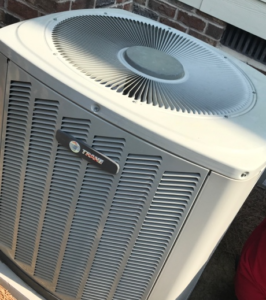 Adjusters should confirm equipment is not working properly before settling a claim.

Hail and wind are among the top claimed causes of loss in HVAC system claims. However, policyholders claim hundreds of systems each year that are working properly at the time of assessment. Settling for them would cause unnecessary claims leakage.

A policyholder filed a claim for two HVAC systems with a total claimed amount of $8,180. The adjuster who assigned HVACi the claim wanted confirmation that hail impacted the units. Testing revealed the first HVAC system had hail damages, though it was still in good condition and operational. There were minor indentations on the top cover panel, and the fan guard was slightly bent. Each component could be replaced to return equipment to pre-loss condition.

The vetted technician tested the second system and determined it was operating as designed without any visual or measured evidence of damages. The adjuster avoided paying an unnecessary settlement for non-damaged equipment.

2. Damages Weren’t As Severe As Claimed 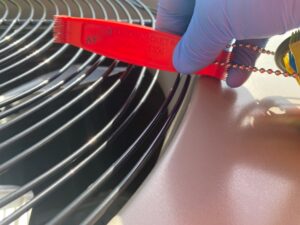 Two split systems had confirmed hail impacts, but a few minor repairs would return them to pre-loss condition.

Sometimes weather incidents impact everything that is claimed. However, these damages most likely won’t require replacements or major repairs.

An adjuster filed a claim for two split systems with reported hail damage. Their combined replacement costs totaled more than $31,000. A vetted HVAC equipment expert evaluated both systems and confirmed the cause of loss as hail for each. Noted hail impacts occurred to the condenser coils and the wire fan guards.

Luckily, the condenser coils weren’t impacted enough to require replacement systems. An HVAC professional could return them to pre-loss condition by installing new fan guards and combing the condenser coil fins. Neither are as expensive as a condensing unit replacement.

3. Cause of Loss Wasn’t What Was Reported 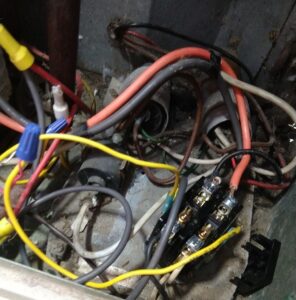 Lack of maintenance or wear and tear, which aren’t typically covered losses, frequently cause HVAC equipment to malfunction.

Even if a storm has caused widespread damages to an area, all the claimed damages won’t be related to the incident.

A policyholder filed a claim for an HVAC system following a windstorm. A contractor advised it would cost $4,800 to return the equipment back to pre-loss condition.

HVACi’s comprehensive evaluation determined the primary cause of loss was wear and tear, which is not typically a covered peril. The contactor wire wasn’t connected to the contactor, and the overall system was in poor condition. However, the HVACi report stated that once the wire was reconnected, the system resumed operation, and all other components measured within an optimal range. Not only was the original cause of loss not typically covered, the damage could easily be resolved without any replacement equipment or labor.

The adjuster would have unnecessarily settled the claim without getting an expert to evaluate the equipment. 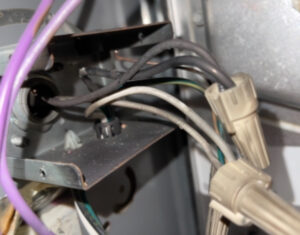 Confirmed lightning damage doesn’t mean a replacement is the best or only solution.

Wind and hail often don’t require replacements, but what about lightning? Sometimes, lightning or high voltage surge can impact equipment and cause severe enough damages for major repairs or, in some cases, full system replacements. However, like other storm-related perils, it’s critical equipment with claimed lightning damage is thoroughly evaluated.

A policyholder claimed that the roof had been struck by lightning and the HVAC system had not been functioning properly since. The contractor gave a verbal quote of $15,800 to return the residential split system to pre-loss condition. An HVACi team member assessed the furnace in the attic and confirmed the cause of loss as lightning. A visual arc mark was present on the furnace cabinetry where the flue pipe connects. The disconnect box also had evidence of arcing. The blower motor’s winding resistances were not in typical ranges.

The extent of the damages required the policyholder to replace the gas furnace. Though this is a more major repair, a full system replacement was not necessary as advised. 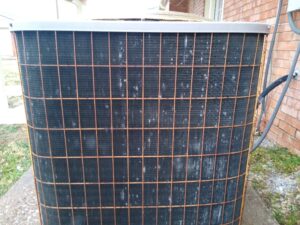 Sometimes damages are extensive enough to require full replacements; however, contractor estimates should be compared to market value pricing.

Storm damage can occasionally lead to a full HVAC system replacement. It could be because of non-compatible equipment, repair prices that are close to or more than replacement costs, or too many impacted components.

The policyholder’s contractor provided an estimate for $11,365 to cover a replacement HVAC system. The estimate stated there was significant storm damage that impacted its efficiency and operation. A new condensing unit would not be compatible with the current system’s air handler; thus, a full replacement was necessary.

HVACi’s assessment also confirmed the primary cause of loss was hail that caused significant damage. The HVACi report also stated that the age and efficiency of the existing air handler made it incompatible to a new condensing unit. However, the HVACi team always researches market value pricing based on manufacturer databases and the loss location. The recommended settlement was thousands of dollars less than the contractor’s estimate, which means the adjuster – and the policyholder – could potentially be paying more than necessary.

These are just a few of the thousands of storm-related claims that the experts at HVACi handle each year. The team is experienced and knowledgeable about HVAC and Refrigeration systems and the insurance industry. We provide comprehensive equipment evaluations to determine cause of loss and scope of damage and deliver an accurate recommended settlement cost along with other necessary information in a thorough report sent to assigning adjusters. Don’t let storm claims be the cause of unnecessary claims leakage. Submit a claim to HVACi to guarantee more accurate resolutions.

Save Your Hail Claim Case Study