Diving into the claims data from a Texas winter storm

The following article on “Diving into claims data from a Texas winter storm,” written by Jay Dykstra of HVACi and StrikeCheck, was originally published on Property Casualty 360.

This time last year, many adjusters were still digging out from the hundreds of thousands of claims that resulted from Winter Storm Uri. By July, settlements had reached billions of dollars and a Texas Department of Insurance report stated there was an expectation to give $5.8 billion in payments to policyholders in Texas, where the storm was particularly destructive and led to half a million claims. Newly released data about some of the items included in claims from the storm pinpoints issues carriers should consider during the next extreme weather event.

Power outages, fallen trees, freezing conditions and other related perils caused many of the losses that occurred in Texas in February 2021. However, it is important to note that even if a cause of loss seems obvious, the peril is not always the reason for a failure. Additionally, everything included in these claims wasn’t damaged.

Adjusters relied on third-party assessment vendors, including HVAC Investigators (HVACi), for quick and comprehensive damage assessments of HVAC systems included in Texas storm-related claims. More than half of the HVAC system claims that adjusters assigned to HVACi had freezing conditions as the reported cause of loss, and 14% listed water, according to the CCG IQ 2021 Annual Report that provides data and trends about hundreds of thousands of property items carriers assigned CCG IQ’s family of brands to assess last year. 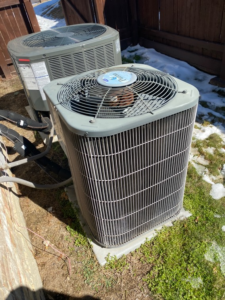 Both these condensing units had reported losses from freezing conditions in Texas; however, one sustained damage from water and the other wasn’t damaged at the time of assessment.

Neither freezing conditions nor water were in the top three perils that HVACi determined impacted HVAC systems included in Texas claims during this time. Instead, one-third of the assessed HVAC systems sustained damage from wear and tear, which is not typically a covered loss.

Heat pumps more than 15 years old are more susceptible to failures when the temperatures drop into the teens. A wear and tear determination is also common because policyholders will file claims citing a catastrophic event, even if the damage is unrelated.

Many claims included non-damaged equipment. Nearly 20% of the HVAC systems the company evaluated were not damaged at the time of assessment. Settling claims with assessment results of wear and tear or non-damaged risk creates unnecessary claims leakage.

Multiple HVAC system losses from the Texas claims also tied back to the widespread power outages and, of course, the weather. The CCG IQ 2021 Annual Report’s section on the Texas Winter Storm showed that 18% of HVAC systems sustained damage from a high voltage surge, 11% from freezing conditions, and 9% had a water loss.

HVAC systems have several electrical components, including the control board and thermostat, that can sustain damage from a sudden voltage fluctuation. These may be caused by power suddenly returning, among other reasons. HVAC systems can also withstand a certain level of water before major repairs or replacements are required.

Adjusters should know that even with the severe circumstances Texas faced last year, less than one-third of the HVAC systems HVACi assessed after the storm required a full replacement. More than half could be returned to pre-loss condition through repairs, and the rest did not require any action.

The next time there are a significant number of claims after a catastrophic event, adjusters should not assume equipment failures are the only reason for the problems. Verify the cause of loss and scope of damage before making an unnecessary settlement.

Get Your Copy of the 2021 Annual Report