Lightning, High Voltage Surge, or Wear and Tear? Be Able to Tell the Difference When Handling HVAC System Claims

Your policyholders are prone to blaming lightning when an HVAC system fails because of an electrical concern. In 2019, 26% of residential claims assigned to HVACi had lightning as the claimed cause of loss. But high voltage surge and age-related wear and tear are just as likely, if not more, to be the true culprits – and only one of those may be covered, depending on the property insurance policy. Adjusters shouldn’t assume lightning is the cause of loss based on a policyholder’s contractor and should rely on comprehensive assessment results to decipher which peril is related to the HVAC claim they are working on. 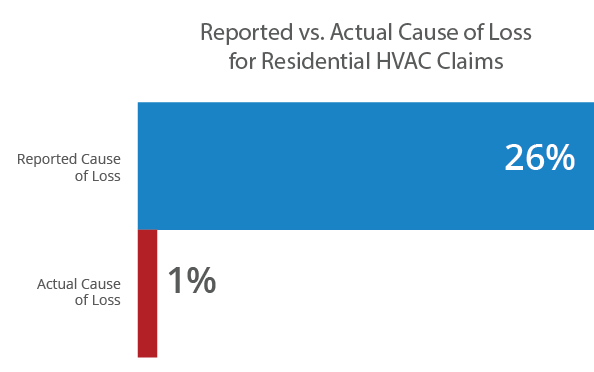 HVACi assessed hundreds of residential HVAC claims in 2019, but most of those claimed as having lightning damage were found to have a different cause of loss.

Figuring out what caused the damage shouldn’t spark debate but be based on the facts of the claim. Here are some of the methods our HVACi team uses to tell the difference.

Differentiate Between the Perils and the Damage They Cause

Knowing what happened to an HVAC system’s electrical components starts with understanding the different perils and what resulting damage is common.

Lightning is prevalent during summer storm months and is a naturally occurring electrostatic discharge formed by a charge imbalance. That occurs when clouds have a negative charge and are met by something with a positive charge, including tall objects on the ground or from other clouds. The result is a current passing between the two. Most lightning takes place within a cloud or between two clouds; therefore, damage by lightning hitting something on the ground is rarer.

The most severe lightning damage is caused by direct strikes to outside equipment and is evident by burning, charring, and melting. Lightning’s large amount of energy needs to exit equipment, which causes ghosting and arcing. Multiple components, including non-electrical ones, sustaining damage is a common byproduct of a strike, and there would be an obvious trail of visual evidence where the lightning traveled from an outside point. 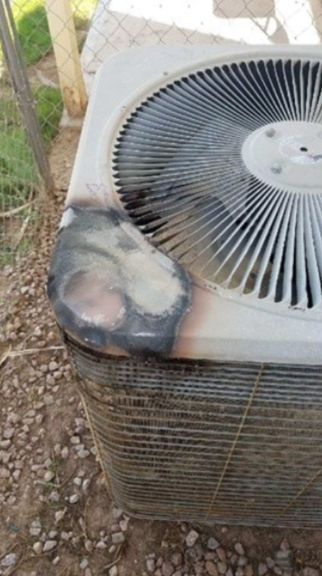 Direct lightning strikes occur on outside equipment with evidence of burning, charring, or melting.

High voltage surges are less powerful than lightning strikes, though they can cause a similar level of damage to HVAC equipment. Surges come from sudden excessive voltage lasting a few nanoseconds to several minutes. Enough of an increase can produce immediate damage on an HVAC’s electrical system. Switching or popping circuit breakers can also create small surges. Multiple small voltage changes could trigger similar damage over time, though that constitutes as wear and tear.

Surges could be a consequence of lightning striking an electrical line elsewhere; conversely, most surges occur when devices that consume large amounts of electricity, such as HVAC systems, generators, or other motors, are turned on or off. Offsite, transformer problems and power grid switching at electrical substations could also cause surges.

One difference between it and lightning is that a surge is confined to an electrical system and uses wiring as its path. High voltage surges don’t have enough energy to melt wires from inside out over long segments of wiring like lightning. Though multiple components may sustain damage, it isn’t visible and requires Ohm meter testing to verify. 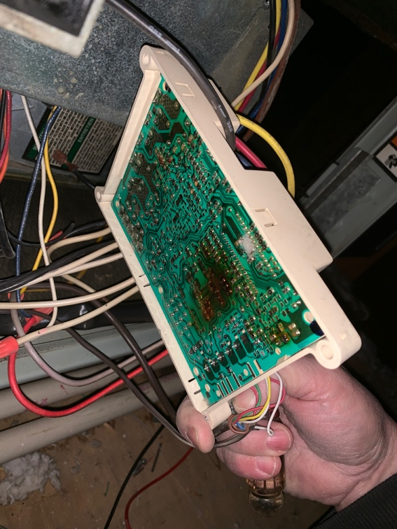 Excessive voltage could cause immediate damage to an HVAC’s control board.

If damage takes place at the connections, it’s a good sign wear and tear is involved. The connections may be loose or have rust or corrosion, which could cause overheating. This can melt or char wire insulation over a long period of time. But lightning or surges wouldn’t affect connections.

Wear and tear damage takes place over time, compared to the other two perils that are instant. A means of testing it is by checking the refrigerant and coils. Acid is frequently misdiagnosed as a symptom of lightning or high voltage surge, but refrigerant can only become acidic over extended time due to moisture, mixed refrigerants, and other contaminants. Lightning can’t acidify the refrigerant in such a short time. Dirty coils are also symptoms of wear and tear versus damage from lightning or surges.

Where damage is initiated may indicate the peril.

Split systems, which are the most common systems in residential claims, have some components that are susceptible to direct lightning strikes. In the condensing unit, these include the compressor motor, capacitor, contactor, and fan motor. Furnace components that are susceptible to indirect strikes or surges are the thermostat, furnace control board, blower motor, gas valve, draft inducer, condensate pump, and auxiliary heat pumps.

Package units, which are most used in commercial, can be more susceptible to lightning strikes and surges because all items are outside. Components at risk for direct strikes are the cabinet and fan grille, the condenser coil, the fan and fan motor, and the disconnect. Equipment prone to indirect strikes or surges are the compressor motor, blower motor, control board components, fan motors, gas valve, draft inducer, and disconnect.

Policyholders can reduce their risk of electrical damages from lightning or high voltage surge using surge protectors. Lightning rods direct lightning to the ground to keep it from striking structures or other objects that couldn’t handle that amount of energy.

To protect against voltage surge, unplug electronics before the power is restored following an outage. Items likely to be damaged in a surge include consumer electronics; kitchen and small household appliances; home entertainment equipment; and the electrical components of HVAC systems, including sensitive circuits and control boards. 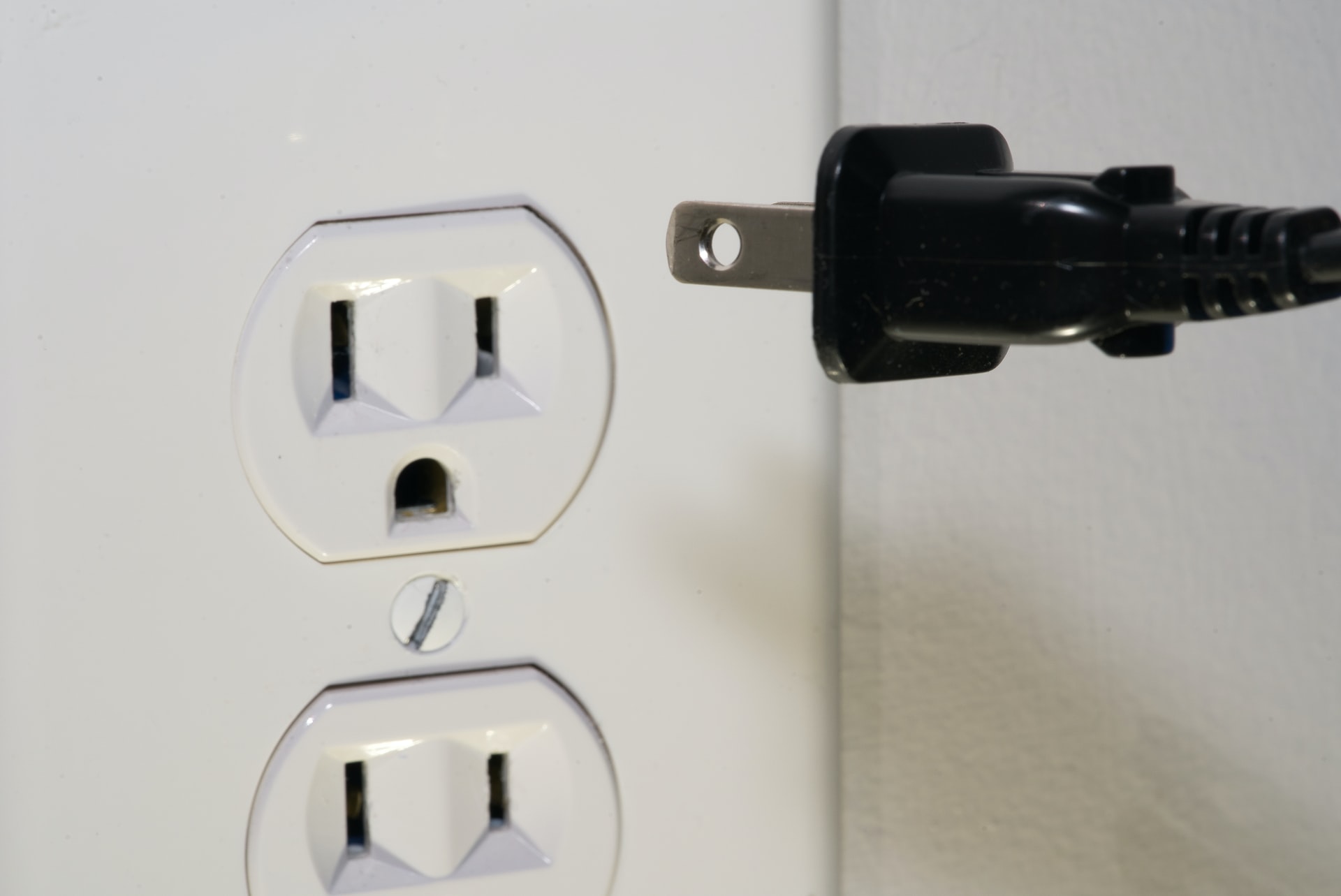 Policyholders can prevent electrical damages from lightning or surges by simply unplugging items before power returns during an outage. Photo Credit: Clint Patterson / CC BY 4.0

Assessing for which peril caused damage can be difficult. And settling with the wrong one may mean covering something that shouldn’t have been. Let the experts at HVACi help by completing the assessments for claims related to HVAC systems to ensure accurate results.