The Basics of Chillers

When a damaged chiller claim lands on your desk, you need to be ready for the complexities that come with it. These systems are often intricate and specialized based on the space or equipment they’re cooling, meaning they present their own challenges to insurance adjusters like you. If you’re not familiar with this complicated cooling equipment and you’re working on a claim that includes one, you’ll want to know the basics. 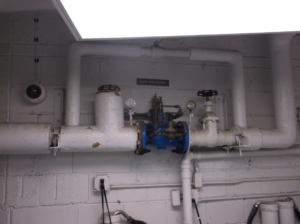 Water pipes for a chiller system

How Do Chillers Work?

Chillers transfer heat away from a space that requires climate control much like a traditional split system or package unit does, but they use water (or a water solution) to do so instead of air. There are two types of chillers: water-cooled and air-cooled. They work similarly throughout most of the process until the refrigerant reaches the condenser, and both are outlined in the following sections. 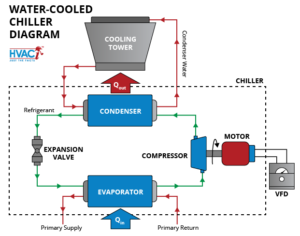 The cooling process begins when water enters the evaporator from the primary return where heat is transferred from the water to the refrigerant.

The now-chilled water is then sent to the water tank via the primary supply (shown in blue), where it is distributed to the various climate-controlled spaces by the water pump. Because heat always moves from hot to cold as stated by the second law of thermodynamics, the chilled water absorbs the conditioned space’s ambient heat in the air handler. A fan then forces the cooled air into the space via the ductwork. The warmer water is then returned to the chiller to be cooled once again.

After that, the refrigerant enters the condenser. Water-cooled chillers use water to surround the refrigerant pipes and draw in the heat (path shown in red). The water is then pumped into a cooling tower to release the heat. After condensing, the refrigerant goes through an expansion valve to reduce pressure (and temperature) before returning to the evaporator, where the process begins again. 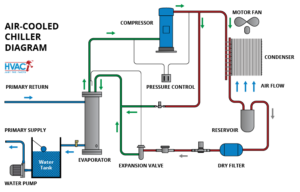 Where Are Chillers Used? 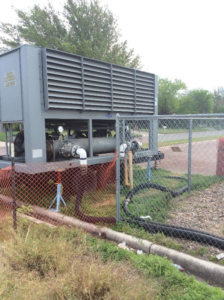 Chillers have several uses and are sometimes preferred over traditional split systems or package units because the water conducts heat better than air. This is also why water-cooled chillers are known for being more consistent and efficient in their performance and for having a longer lifespan than their air-cooled counterparts. Water-cooled chillers are common in medium and larger facilities (so long as they have an adequate water supply), such as airports, hospitals, hotels, shopping malls, commercial buildings, and more. (Pictured: A portable chiller)

Air-cooled chillers are more prevalent in small to medium sized facilities where space and water may be limited. The costs to install and maintain these chillers are lower than that of their water-cooled counterparts, but they typically have a shorter lifespan. These chillers are commonly used for restaurants, corporate and sporting events, and temporary structures.

Chillers use metal tubes (usually made of copper or carbon steel) to transfer water between the chiller and the climate-controlled space. The simple presence of oxygen in water can cause corrosion, but if the water and pipes are treated properly, this can significantly reduce the risk. However, if the water treatment is inadequate, sediment, minerals, and bacteria can enter the system. If there is a buildup of sediment or bacteria that causes oxygenation levels to differentiate, the metals can begin to corrode. In addition, any point where two different metals are used can be at risk for corrosion due to their different electrochemical properties. No matter how the corrosion occurs, it can cause leaks that will damage the chiller, reduce its efficiency, and possibly damage the area surrounding the chiller. 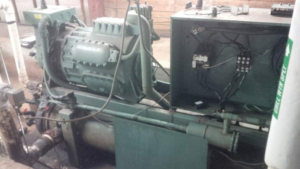 Compressor for a chiller

These complex machines require a lot of maintenance to keep them in good working order. If proper steps aren’t taken, the chiller can corrode, clog, lose efficiency, or experience a number of other issues. For example, if proper water treatment isn’t maintained or if open cooling towers aren’t cleaned, sediment or particulates can be introduced to the system, causing clogged pipes and poor heat transfer. An air-cooled chiller’s condenser can be blocked by debris or become caked in dirt, which also lowers efficiency.

The electrical systems within a chiller are carefully designed and as complex as the rest of the machine. They can easily be thrown off balance by a high voltage surge or wear and tear. If there is a grounding issue or a power supply failure, the chiller may detect this and shut itself off. Overloading the chiller can cause it to overheat, which will likely result in failure. Wires and cables can become loose or damaged after maintenance or due to negligence, which can result in chiller malfunctions.

We Can Help Settle Your Chiller Claims

Chiller claims are no walk in the park – several components can malfunction and cause the entire system to fail, and the source may not always be clear. To handle them properly, you may need an expert opinion. If you’re handling a chiller claim, let us help! Our trained technicians will document the damages and our experts will put together a comprehensive report outlining damages, cause of loss, and costs involved with repair or replacement.