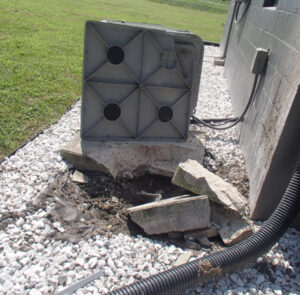 Lightning losses can look extreme, like this condensing unit taken off its pad. Even then, full HVAC system replacements are unlikely.

Less than 1% of HVAC equipment that HVACi assessed last year had verified direct lightning damage as the cause of loss, according to the CCG IQ 2021 Annual Report. While other perils are more likely to have damaged policyholders’ HVAC systems, adjusters still need to take lightning into consideration in claims.

It may be a surprise that direct lightning can affect this component because blower motors are attached to the furnace, which is part of the indoor equipment in a split system. These losses can occur when lightning strikes a chimney or roof and impacts the furnace cabinetry.

Don’t forget: Arc marks and other visible evidence are present to show where the lightning traveled on a property. 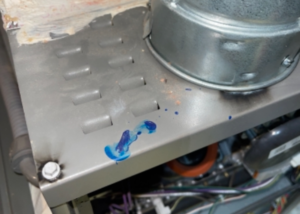 The arc mark shows where direct lightning affected HVAC equipment and resulted in damage to the blower motor.

Refrigerant is essential to any split system. It evolves from gas and liquid states depending on its temperature and pressure and transfers heat to or away from a space. Lightning striking indoor or outdoor HVAC equipment can affect the refrigerant, which would cause the system to malfunction. 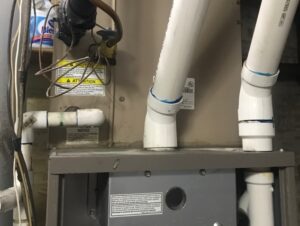 It’s critical to note this type of damage may result in a major repair, but even then, a full replacement is unlikely to be necessary. In this claim, the adjuster was advised that the policyholder needed a new condensing unit, evaporator coil, and copper lineset. An HVAC system expert would recommend replacement equipment that is compatible with and meets efficiency standards of the components already in place.

Refrigerant may also be affected by a failed lineset. HVAC evaluations have shown that lightning can blow a hole in the lineset, which connects indoor equipment to the outdoor condensing unit. This compromises the entire refrigerant circuit, requiring repairs.

Don’t forget: R-22 is a frequently used refrigerant type. Though virgin R-22 was banned in 2020, reclaimed R-22 can still be purchased and used in existing equipment. 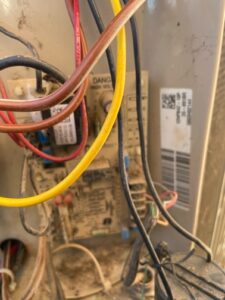 Lightning struck a property and caused a defrost control board, and other components, to malfunction.

Though there may not be visual evidence, operational testing would prove whether the board has failed. This type of damage would likely result in a minor repair by replacing the defrost control board to return equipment to pre-loss condition.

Don’t forget: Before settling for replacement equipment, whether an individual component or a full system, verify that the cost matches market values for the loss location.

As previously shown, lightning can travel through other non-electric items such as chimney flues and linesets. Ductwork is also susceptible to lightning damage and could be the only HVAC component affected. 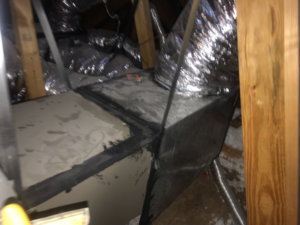 In one assessment, the unit was operational as were all the internal electrical components; however, there were two failed runs of flexible ductwork. The lightning struck the loss location’s roof, and two flexible ductwork runs in the attic were damaged. All other components measured within an optimal range, and the system could be repaired.

Don’t forget: Comprehensive assessments evaluate all HVAC system equipment so that nothing is overlooked.

Though lightning can affect small, individual components, it can also impact enough equipment to require a replacement furnace or condensing unit. Even then, a full HVAC system replacement is rare unless there are efficiency incompatibilities. It’s important to have equipment evaluated to know the best course of action.

Don’t forget: Objective experts will ensure only the most appropriate repairs or replacements are recommended to return equipment to pre-loss condition.

The HVACi team uses engineering best practices to thoroughly test all HVAC and Refrigeration equipment and provide recommendations for repairs and replacements. We’ll also recommend settlement costs that are in line with market values. Adjusters will receive a comprehensive report with verified cause of loss and scope of damage to reduce the risk of claims leakage.

Did your policyholder report lightning as the cause of loss for an HVAC system? Submit the claim to HVACi for accurate results.

Get Your Lightning Damage to HVAC Systems Guide

How to Handle Lightning and Surge Claims Without Guesswork Webinar Recording

Lightning is one of the most frequently reported causes of loss listed on HVAC and electronics claims – policyholders reported it for almost 20% of HVAC systems and nearly 40% of electronics in claims that HVACi and StrikeCheck handled last year. Advancement in testing tools and verification reports have made it easier for adjusters to confirm or exclude these perils before settling a claim unnecessarily.

Watch our How to Handle Lightning and Surge Claims Without Guesswork Webinar recording by filling out the form provided.

Important: Pre-recorded webinars do not qualify for CE credit.

Claims often include multiple items that need people with specialized knowledge to inspect them. The adjuster for the claim described in this case study sought HVACi’s help to determine if a flue pipe and HVAC system were damaged by lightning. When the insured complained of circuit breakers tripping, the adjuster asked the HVACi experts to get help from StrikeCheck team to add an electrical system evaluation to the assessment scope. StrikeCheck’s lightning verification reports added further data to verify the cause of loss and determine the best recommended steps for the policyholder and insured.

Fill out the form to read how HVACi and StrikeCheck can be used together for comprehensive assessments and actionable claim solutions without slowing down the claim process.

Get Your Copy of the Case Study

Lightning and surge are the most frequently reported or determined cause of loss for commercial and residential policyholders.

Better understand these two perils, what causes them and which types of equipment are most susceptible to surge and lightning impacts with the Lightning and Surge Impacts in Property Claims Guide.

Fill out the form to get your copy now.

What to Look for in Lightning and Surge Claims Guide

What types of characteristics will HVAC system components have if they’ve been impacted by lightning, high voltage surge, or wear and tear? Adjusters can find out with this interactive guide, which breaks down certain criteria often found with these perils. These characteristics may include if impacts are visible, if more than one component can be affected, or if only electrical equipment will be impacted.

You’ll also learn key claim trends, such as reported vs. actual cause of loss percentages, and be quizzed on your knowledge of these perils.

Fill out the form to receive your link to the What to Look for in Lightning and Surge Claims Guide.

Nearly a quarter of the HVAC systems that HVACi assessed last year had lightning or surge as the reported cause of loss because this equipment is particularly susceptible to these perils. The Investigating Lightning and Surge HVAC Claims Webinar provides adjuster information about how to handle these claims more accurately and better tell the difference between damages caused by direct lightning, surge, and wear and tear.

Through this webinar, adjusters will:

Watch our Investigating Lightning and Surge HVAC Claims Webinar recording by filling out the form provided.

Important: Pre-recorded webinars do not qualify for CE credit.

More than 10% of the HVAC systems that HVACi assessed last year sustained damage from direct lightning or high voltage surge – and they were the top causes of loss policyholders claimed. Find out which components are most susceptible to each of these perils with this one-page guide.

Fill out the form to receive your copy, which includes:

For more information about lightning and surge damage to HVAC systems, check out the article Lightning, High Voltage Surge, or Wear and Tear? Be Able To Tell the Difference When Handling HVAC System Claims.

A policyholder had a laundry list of property repairs and replacements to make following a storm. Included in the contractor estimate were three recommended full HVAC system replacements for hail and lightning damage and a comment containing R-22 misinformation. The adjuster contacted HVACi’s experts to verify cause of loss and ensure only necessary replacements were made.

Fill out the form to receive your copy of this residential lightning claim case study that outlines the loss details, what HVACi’s testing revealed, and how we recommended the claim be settled.

If a contractor makes a repair and an HVAC system still doesn’t seem to be working properly, a policyholder and adjuster may take the contractor’s advice and think high-dollar replacement equipment is the next logical step.

Good thing the adjuster didn’t go on that assumption for this commercial claim! Fill out the form to discover the real story about this HVAC system and what HVACi recommended it would take to return it to pre-loss condition.

Find Cause of Loss in a Flash with This Guide

Annually, more than 25% of claims assigned to HVACi have lightning as the claimed cause of loss, but wear and tear or high voltage surge are more likely to be the actual peril that caused damage. This could affect how the insurance carrier will settle with the policyholder. Differentiate between these causes of loss more accurately with this guide that outlines frequent characteristics of HVAC system damages and whether they’re more likely to be related to lightning, high voltage surge, or wear and tear.

Fill out the form to get your copy to reduce the chance of you settling for the wrong peril again.