Though changes aren’t scheduled to take effect until January 1, 2023, your residential policyholders will likely be hearing from their contractors much sooner about what replacements they think insureds will need to comply with the upcoming HVAC system energy efficiency standards.

Adjusters should be prepared to field questions and claims related to the changes.

The U.S. Department of Energy (DOE) applies a variety of energy conservation standards for appliances and other equipment to save consumers money on utility costs and implement the use of more environmentally friendly products. The Seasonal Energy Efficiency Ratio (SEER), Energy Efficiency Ratio (EER), and the Heating Seasonal Performance Factor (HSPF) were established to score HVAC systems’ efficiency. The DOE set minimum standards that manufacturers and policyholders must follow.

2. This Isn’t the First Time SEER Regulations Have Changed

HVAC systems have had energy conservation standards since 1992, with multiple updates since then. The most recent revision went into effect January 1, 2015, which set minimum standards and divided the country into regions based on climate for the first time. 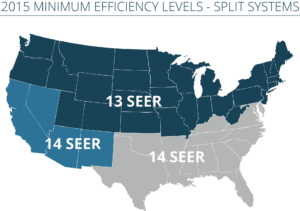 North, Southeast, and Southwest Regions: Dividing the country as North and South was based on the number of population-weighted degree days. Those with 5,000 heating degree days or more are considered the North region. The Southern region was further divided based on the conditions of hot-dry (Southwest) versus hot-humid (Southeast). The Southwest region has the fewest states with California, Nevada, Arizona, and New Mexico.

In addition to identifying the regions, the 2015 regulation update gave minimum SEER requirements for split system HVAC systems, such as 13 SEER for the Northern states and 14 for those in the Southern regions, but it was known that regular efficiency updates would be necessary. 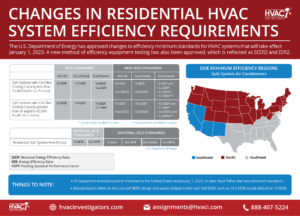 Like the 2015 revisions, the 2023 standards are meant to improve equipment efficiency. Many minimum requirements for SEER standards are slated to increase by at least 1 SEER.

Split system condensing units that are less than 45,000 Btu/hr (3.75 Tons) are expected to require a minimum 14 SEER in the North and 15 SEER for the Southeast and Southwest. Equipment equal to or greater than 45,000 Btu/hr (3.75 Tons) are supposed to be at least 14 SEER in the North and 14.5 SEER in both southern regions. Many times, a 14.5 unit would not be available based on many factors, including brand. At that point, the policyholder would have to round up to a 15 SEER unit.

HVAC systems used in the Southwest region must also meet required EER minimums. The minimums also depend on the size of the system.

Split system heat pumps efficiency minimums also are expected to increase from 14 SEER to 15 SEER in all regions. They must also comply with additional HSPF efficiency rules.

In addition to the new minimums, the DOE is updating its testing procedures. These increase the total external static pressure testing conditions for SEER2 to make the testing conditions more like that of a traditional ducted system in a real-world application. The required SEER2 and EER2 rating standards are lower when using this different testing method. For example, split system HVAC systems are projected to require a 13.4 SEER2 minimum rating in the North instead of 14 SEER.

4. It Could Impact Your Policyholders Who Need Replacement Equipment

All equipment manufactured or imported to the United States on January 1, 2023, or later must follow the new minimum standards. These additional efficiency requirements may cost policyholders more when purchasing new equipment – which could lead to increased settlements.

However, it is important to note that equipment, regardless of compliancy, can still be repaired. 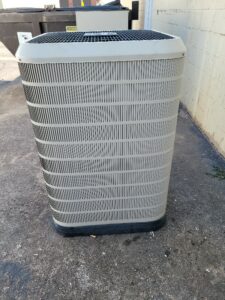 Equipment can still be repaired, even if it isn’t compliant with the new standards.

5. You Don’t Have to Keep Up with Compatibility Alone

Staying up to date with all the different HVAC system types, and which regulations apply to them, can be complicated and time-consuming. HVACi’s experts help insurance professionals figure out the best solution to resolve HVAC-related claims that are in line with regulations and equipment best practices.

Through onsite assessments, we’ll confirm cause of loss and scope of damage to determine if replacements are necessary. Our comprehensive reports also provide a breakdown of repair and replacement recommendations, costs pertaining to each, and a settlement recommendation that considers market labor and equipment pricing. Submit a claim to ensure accuracy and prompt resolutions.

Get Your Regulations Case Study