When it comes to smoke and fire claims, HVACi experts have noticed a discrepancy between what the policyholder reported as cause of loss and the peril determined by comprehensive testing. Even confirmed smoke and fire damage may not require full replacement or costly repairs. Adjusters can make confident determinations by understanding how these perils pose a threat to exterior HVAC elements and common indicators of these damages.

The discrepancy between the reported cause of loss and the actual cause of loss in the CCG IQ 2021 Annual Report highlights the need for expert assessment in smoke and fire claims.

An HVAC system that sustained fire losses often has visible evidence that can include charring, melted components, and burn marks. However, knowing a probable cause of loss doesn’t paint a whole picture. Determining the scope of damage for an affected HVAC system requires an HVAC expert, as does accessing units in a fire-affected area. The characteristics of each type of HVAC system determine its fire risk as well as its ability to be repaired or replaced after a loss.

Electrical components and wires housed in the condensing unit may be damaged by fire, but they may also be the cause of damage to other parts of an HVAC system. Catastrophic capacitor failure may cause an ignition that consumes the wires, leading to more damage throughout the unit. 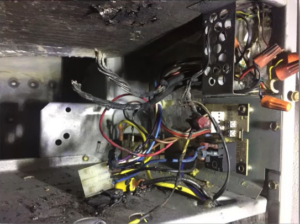 The control board within an air handler overheated and ignited, damaging other electrical components and leaving the unit’s interior blackened with soot.

Some damage to HVAC units doesn’t originate on the property. In fact, it can come from miles away. Wildfires are on the rise, according to the National Interagency Fire Center. The environmental and human cost of these fires is devastating, and they also have financial implications for the property and casualty insurance industry.

Outdoor split system condensing units and package units are vulnerable to direct flames from a wildfire. However, smoke, soot, and ash from a wildfire can be carried for miles before being deposited on HVAC equipment. Condenser coils in good condition can often be returned to pre-loss condition with a simple cleaning.

Condenser coils affected by dry soot, ash, and other particles can often be cleaned using a special solvent to return to pre-loss condition, avoiding potentially costly repairs or replacements.

Smoke may not be the cause of loss to an HVAC system even if a fire has been confirmed near or on a property. An objective HVAC system expert will ask the right questions and verify details of the affected components to confirm or exclude fire as the actual cause of loss. An onsite inspection can determine whether there is smoke odor impact, whether buildup is soot or dirt from deferred maintenance or missing filter components, and whether the system was running at the time of the reported fire.

There are two main types of smoke that can be found on the condenser coils. Dry smoke is the most common to external units and is often the result of a wildfire or other exterior flames. Wet smoke results from burning rubber or plastics. Unlike dry smoke, soot, and ash, its greasy consistency makes it more difficult to clean. 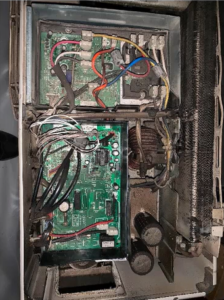 Wet, sooty smoke has a greasy appearance and is harder to clean from delicate wires and components, seen in this unit, than dry smoke.

Dry smoke damage can often be cleaned from exterior components, using a method similar to that employed against soot and ash, to return them to their pre-loss condition. The age and condition of the unit and the severity of the damage assist in determining how best to address the damages.

Several factors influence whether an HVAC unit can be restored to its pre-loss condition. While smoke and fire is the cause of loss for many claims where these perils are cited, many damages don’t warrant full replacement. The rest were found to function as designed, or they could be repaired with Like Kind and Quality components.

Don’t assume the worst or hope for the best when it comes to smoke and fire to HVAC systems. Trust the HVACi team to receive accurate causes of loss and repair or replacement determinations for your claim. Submit a claim to HVACi for quick, comprehensive solutions.