The following article on “Hurricane havoc: Damages in storm-related HVAC systems claims,” written by Jay Dykstra of HVACi and StrikeCheck, was originally published on Property Casualty 360.

It’s easy to understand why hurricanes have such a bad reputation compared to other thunderstorms. The images of large, rotating storms created over the warm, tropical waters can be alarming, especially factoring in the minimum 74 mph winds and the storms’ erratic paths. They can impact anything in their way, including residential and commercial HVAC systems. But insurance professionals shouldn’t assume a hurricane is the cause for all HVAC system damage during that timeframe because there are issues to look for and to be wary of following a storm.

Hurricanes and tropical storms cause more costly damage than inland storms because of flooding from heavy rains and storm surges and damage from hurricane-force winds. A 2019 report from the Congressional Budget Office estimates that expected annual economic losses from most types of damages caused by hurricane winds and storm-related flooding total $54 billion for households, commercial businesses and the public sector.

Hurricanes, depending on their category, can have wind speeds of 74 mph to upward of 157 mph, according to the National Hurricane Center. It’s no wonder that wind is the main concern related to HVAC systems.

The condensing unit is the component most at risk for hurricane winds damage in split systems, which are the most common residential HVAC systems. The condensing unit is always outside and can be on a concrete or plastic pad, elevated on brackets, or installed on the roof. The all-in-one package units, which are most common for commercial properties, are also susceptible to wind damage.

The most minor wind-caused damage is dust and debris clogging the condenser coil, which surrounds the compressor on the condensing unit. This restricts airflow, which, over time, could impact the condensing unit’s efficiency. If the condenser coil aluminum fins aren’t dented, a policyholder can get them cleaned using a special cleaner and a hose. (Note for your insureds: Pressure washers and cleaners meant for bathtubs could cause more damage to the coils and should be avoided.)

The most common scenario with wind and condensing units, particularly for residential systems, is that the condensing unit could be blown over or pushed off its pad. The damage this causes are electric whip and disconnect pulled apart, cabinet damage, coil damage, or kinked or broken refrigerant lines. This may require an insurance carrier to settle for some equipment repairs, but a full replacement isn’t likely. 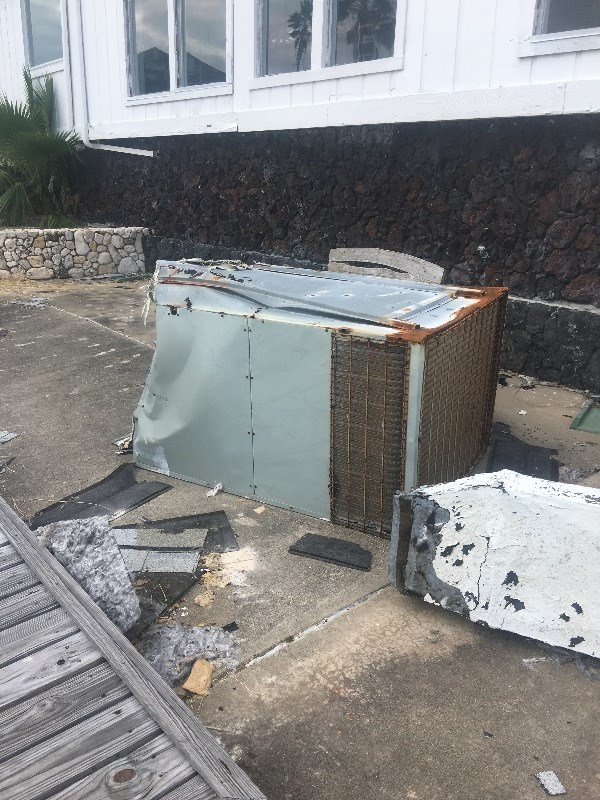 Wind can cause package units to fall to the ground and be damaged, frequently requiring replacement.

On the other hand, in commercial systems where package units are on the roof, the equipment could be ripped off and thrown to the ground. If this is the case, a full replacement is often needed, but adjusters should be mindful to ensure models are like kind and quality and pricing is in line with market rates.

Wind can also be the culprit related to another peril: foreign object impact because tree branches or other heavy objects can be picked up and damage all or part of the condensing unit. This can dent the malleable aluminum fins. If the condenser coils aren’t spine fin or microchannel coils, they may be able to be combed, which is considered a minor repair that can be completed in a matter of hours.

If the fins are torn, or a type that’s not able to be combed, bringing the policyholder to pre-loss condition still might not require a full replacement, though some components may have to be switched out. Cause of loss is frequently easier to determine with foreign object impact; although, it’s often more difficult to evaluate repair options and their cost-effectiveness.

A surge in water-related claims

Flooding is a frequent consequence of hurricanes either because of the onslaught of precipitation falling in a short time or because of the storm surge that can sometimes increase the water level by more than 30 feet along the coast. Standard homeowner’s insurance policies typically don’t cover surface water, groundwater or general flooding. On the other hand, water from wind-driven rain that causes damage to HVAC systems may be covered in some scenarios. It’s important adjusters know where the water is coming from to accurately handle the claim. 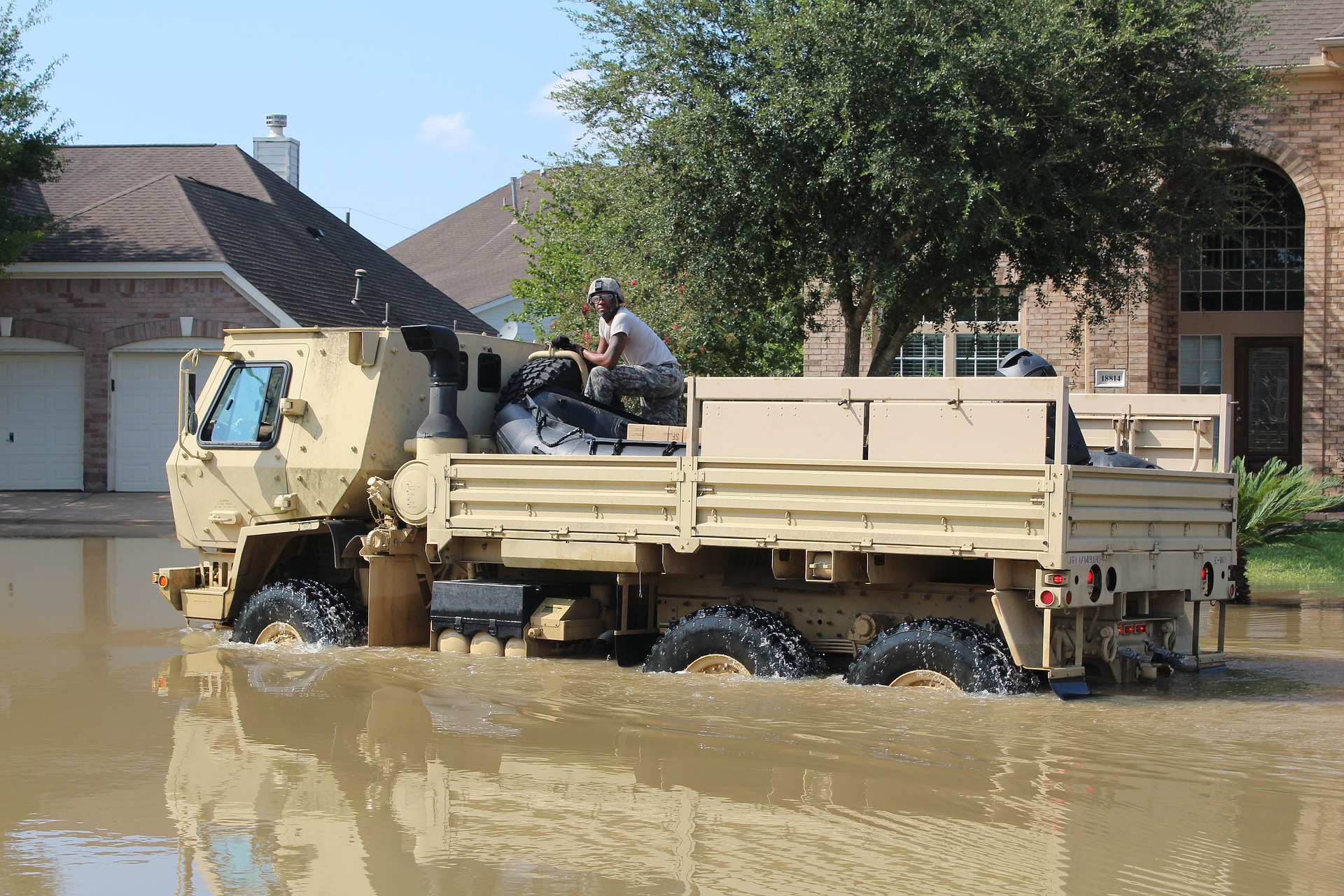 Water at the bottom of the condensing unit is typically not cause for concern; however, water up to the compressor may require some repair. Once water reaches electrical components, repairs are much more challenging, especially if it’s saltwater that causes corrosion. Horizontal air handlers or furnaces found in a crawlspace are more likely to be damaged because the rising water can reach the components much faster.

Ductwork, furnaces, and other indoor equipment could also be claimed for water damages, especially in circumstances where a roof is damaged or ripped off.

With the influx of claims that occurs following a weather-related event, it’s easy to have a non-covered peril slip through, which could result in unnecessary claims leakage for the insurance carrier.

HVACi, which offers claim assessment support nationwide, analyzed the assigned claims from Hurricane Dorian, which took place Aug. 24–Sept. 10, 2019. The storm caused an estimated $1.5 billion in losses, both damages and economic, in the United States. 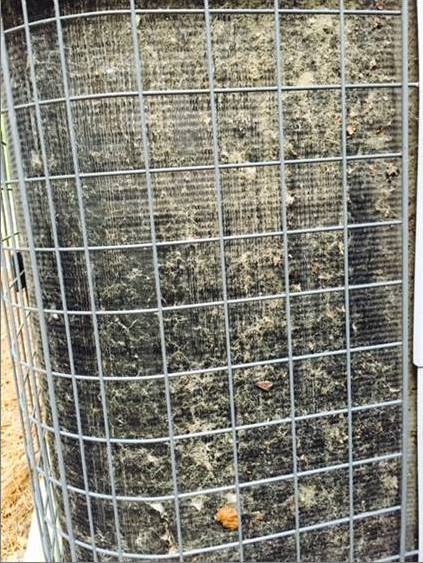 Clogged condenser coils are likely a maintenance issue, and not related to a hurricane.

According to the HVACi 2020 Annual Report, 59% of the systems claimed as damaged from Hurricane Dorian didn’t have hurricane-related damages. Of the 36% of claims reported as being wind damaged, only 11% of them had wind as the actual cause of loss. Nearly half of claims stemming from Hurricane Dorian were determined to be age-related wear and tear not typically covered by a policy. Adjusters should be mindful that wear and tear is just as likely a cause of loss as repercussions from a hurricane.

This year, forecasters have predicted more storms like Hurricane Dorian. While it’s easy to get overwhelmed with the influx of claims, insurance personnel should ensure they consider all the factors during assessments on HVAC system components before making settlements to ensure accuracy and that they are not creating unnecessary claims leakage.