When water leaks from the ceiling, many people stick a bucket underneath. Each little droplet may be barely visible, but if the leak isn’t repaired, the bucket will eventually overflow. Claims leakage can be a lot like this.

As an adjuster, you may have unintentionally settled claims for $1,000 more than they should have been. That claims leakage doesn’t seem like much, and for a while it won’t affect the carrier. But $1,000 over every claim from every adjuster could eventually have larger consequences for the carrier.

Let’s return to the water example. What if the leak is in the attic and no one knows about it? With no one noticing and nothing being repaired, the water could ultimately cause catastrophic damages. This is the same as carriers not realizing how much claims leakage is occurring through inferior processes until an audit finds it – and by then it could have affected not only the carrier but the policyholders as well. Premiums may have increased to make up for the losses, and policyholder satisfaction may have decreased.

Mitigating claims leakage is possible with a few simple changes.

Verify cause of loss on every claim. Last year, HVACi assessed hundreds of thousands of HVAC and Refrigeration systems. Of the perils that were originally reported by policyholders, 43% of them were recategorized following HVACi’s comprehensive, objective assessment, according to the CCG IQ annual report. Confirming the cause of loss guarantees that an adjuster is only settling for equipment that is malfunctioning and that it was damaged by a covered peril.

Evaluate if repairs are a better solution than replacements. Last year, the experts at HVACi completed assessments and concluded that 11% of residential systems were non-damaged, but more importantly, that 62% of equipment could be repaired. In dollars, the average residential claimed amount was $7,837, and the average recommended settlement amount was $4,026 – resulting in nearly $4,000 in average claim accuracy.

Seek expert support. Underlying causes of claims leakage could be human error, insufficient training, and guesswork – often at no fault of the adjuster. The indemnity leakage data mentioned above only applies to HVAC and Refrigeration claims. Evaluating claim results for other types of equipment would likely yield similar conclusions. Adjusters don’t have to be experts on every claimed item that crosses their desks. However, getting specialist assistance will decrease claims leakage potential. Subject matter experts can provide a definitive cause of loss and scope of damage to ensure more accurate claim settlements. 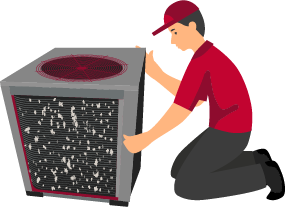 Research Market Value Prices. Adjusters may have confirmed the loss is a covered peril and could still settle for more than is necessary if they don’t review market value pricing for Like Kind and Quality systems. Equipment and labor pricing fluctuates based on brand, features, and the policyholder’s location. Not considering these could cause an adjuster to settle for more or less than is necessary.

HVACi is an all-in-one claims solution. We apply our knowledge and experience to thoroughly evaluate claimed HVAC and Refrigeration equipment throughout the United States. Our professionals complete testing based on engineering best practices to verify cause of loss and determine scope of damage. Then we deliver objective, comprehensive reports that include repair and replacement recommendations, settlement suggestions, and market value pricing for necessary equipment. Adjusters have all the tools they need to settle the claim with minimal overage.

Submit a claim to HVACi to settle HVAC and Refrigeration claims more confidently and accurately. That will result in fewer drops being added to the claim leakage bucket.