It’s been nearly two years since the end of production of the refrigerant R-22. And while R-410A has gained popularity for use in HVAC systems in the United States, it likely won’t become the most prevalent refrigerant as leaders globally look for alternatives with fewer negative environmental impacts.

It may seem difficult to keep track of refrigerant rules when handling HVAC claims, but adjusters should understand what the changes are and why they are taking place, particularly because contractors may be giving policyholders misleading information that could affect settlements.

Refrigerant is the chemical compound used in HVAC systems that is continually changing state while the system is engaged and the refrigerant is moving. Refrigerant absorbs heat in the evaporator coil when it is in a low pressure liquid state and releases that heat in the condenser coil during its high pressure gas phase.

Hydrochlorofluorocarbons (HCFCs), including R-22, have been used as refrigerants in HVAC systems for decades. However, the U.S. Clean Air Act and the Montreal Protocol on Substances That Deplete the Ozone Layer have initiated steps to reduce the negative impacts to the ozone layer since the 1980s. The HCFC phase out occurred in incremental decreases until the complete ban on production and importation of virgin R-22 went into effect January 1, 2020. (Find out more with this HVAC Regulations Overview Webinar) 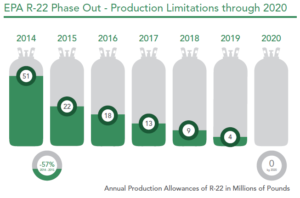 Production of R-22 phased out over several years until the 2020 ban of virgin R-22; however, this equipment can still be serviced and repaired with a reclaimed version.

Regarding this change, it’s important to note that the U.S. Environmental Protection Agency (EPA) agrees that the overall use of R-22 is not illegal, and systems that operate with it don’t have to be replaced. Equipment can continue to be maintained, repaired, and serviced with reclaimed R-22.

R-22 and R-410A are not interchangeable in HVAC systems. Policyholders who have a split system with a furnace can replace the condensing unit and evaporator coil and flush the lineset to make equipment compatible if they use different refrigerants. Systems with a heat pump that need a new condensing unit would need a full replacement for a refrigerant mismatch.

R-410A Is Not the Final Solution

While its prevalence is increasing, R-410A has been around more than 25 years. However, R-410A is not a long-term solution for manufacturers.

R-410A is a blend of two hydrofluorocarbons. It doesn’t have chlorine and is thought to be more efficient than R-22. However, it has different negative impacts to the environment. Though the ozone depletion potential is lower than R-22, it has a much higher Global Warming Potential (GWP), which is the measure of how much energy the emissions of 1 ton of a gas will absorb over a given period of time, relative to the emissions of 1 ton of carbon dioxide, according to the EPA.

The Kigali Amendment to the Montreal Protocol studied hydrofluorocarbons (HFCs) and other substances with high GWP. Countries who supported the amendment agreed to an 85% phasedown of the production and consumption of HFCs, including R-410A. This must be completed by 2036. The United States signed the agreement, but it had not been ratified as of January 2021. 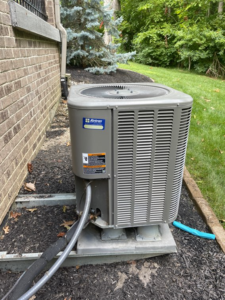 Like R-22, the use of R-410A is going to be phased down to reduce environmental impacts.

In December 2020, the American Innovation in Manufacturing Act gave the EPA the authority to phase down consumption and production of HFC refrigerants with high GWP, and more specific regulations are expected. However, some states, including California and Washington have already been working on statewide regulations to go into effect sooner for certain types of HVAC systems.

A few types of refrigerants are gaining popularity among manufacturers, but concerns exist that are keeping them from being chosen as the definitive alternative to R-410A.

Some manufacturers have already said they are looking to R-454B, particularly for chillers, heat pumps, and rooftop equipment. Carrier said it would use R-454B to replace R-410A in ducted residential and light commercial package solutions. Honeywell and Johnson Controls have also selected R-454B for ducted residential and commercial unitary products, according to articles by Cooling Post. 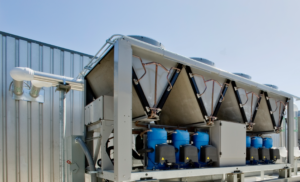 Some manufacturers have already said they will use R-454B in certain HVAC equipment, including air-cooled scroll chillers.

R-454B has a lower GWP than R-32, though both are considered similar in performance to R-410A. While these may be better for the environment, safety concerns exist related to these refrigerants. They are mildly flammable, which may impact the claims that adjusters see from equipment that uses them. The worry is if a leak and a spark in an enclosed space could ignite a fire.

Before the phasedown of R-410A, an overarching consensus of which refrigerant to use in most HVAC systems must be made. But for now, adjusters should continue ensuring accurate settlements on HVAC claims and not settle for unnecessary replacements based on misleading information about what regulations require.

Our HVACi team stays up to date with all HVAC efficiency and refrigerant rules, and our experts have the experience and knowledge to evaluate equipment to determine cause of loss, scope of damage, and market value pricing. Submit a claim to HVACi to receive comprehensive damage assessments and repair and replacement recommendations for accurate and quick settlements.