The following article on “When water & HVAC systems mix, it’s not always a total loss,” written by Jay Dykstra of HVACi and StrikeCheck, was originally published on Property Casualty 360.

Settling water loss claims isn’t cut and dry. Water isn’t an automatically covered loss, such as damage that originates from flooding vs. a pipe leak. What’s more, policyholders and their contractors may feel the extent of the damage, particularly for HVAC systems, warrants major repairs or replacements, even when it doesn’t. This could result in a leak of a different sort. Companies can reduce the risk of claims leakage from water-damaged HVAC system claims by understanding how equipment can be impacted.

HVAC components that could be compromised

In 2020, 83% of the water-damaged HVAC equipment our company evaluated could be repaired. Among the factors that play into that determination is which components are most at risk.

Residential policyholders are more likely to have split systems that have components indoors and outdoors, and commercial policyholders have a higher number of package units that are entirely outside. While external HVAC system components always have a higher risk for water damage, particularly during severe weather such as the upcoming hurricane season, equipment located on the ground is even more susceptible.

Water in the lower parts of the condensing unit typically isn’t cause for concern. It becomes an issue when it goes higher on the equipment and reaches the compressor terminals. Areas prone to flooding may require policyholders to raise their equipment one or two feet above base flood elevation using a platform of concrete or masonry block to prevent this from occurring. 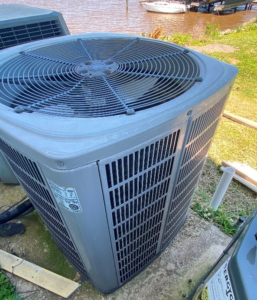 If the condensing unit is moved off its pad, the biggest risk is that the copper lineset will break or kink. This increases the chances for contaminants to enter the refrigerant loop, which could cause major damage. If a replacement was warranted, the average cost for a split system last year was $9,295.

Outdoor components aren’t the only HVAC equipment susceptible to water damage. Indoor furnaces or air handlers in split systems can be compromised, particularly if water causes a short in the electric circuits and damages wiring, motors and the electronics.

The amount of damage indoor equipment sustains depends on type and location. A horizontal furnace in a crawlspace will have significant damage sooner because of its proximity to the floor. A vertical furnace is more protected because the burner compartment is higher up, though water could reach the blower wheel and motor, which could require repairs. Equipment housed in the attic is least likely to have water damage unless the roof leaks onto it.

When considering claims with damage to indoor equipment, adjusters should make sure an HVAC expert looks for a water line, checks the control board for damage and evaluates the ductwork. There could be premature rusting or corrosion in sheet metal ductwork, flex ductwork could sag or ductboard may swell. Insulation inside the blower compartment could also become water-damaged.

HVAC systems are designed to withstand some impacts. It’s unlikely large amounts of rain will harm the condensing unit or package system directly. According to the CCG IQ Annual Report, water was the actual cause of loss for only 4% of the HVAC systems that carriers assigned to HVACi. Water is often not the direct cause of loss but could be related to other perils causing damage.

Erosion: Flood water from storm surges or water falling too quickly at one time can cause erosion and wash out what’s underneath the condensing unit. Erosion and flooding could take the equipment off the pad, wash the unit away or cause it to not be level. Depending on how far off the original location it is, there could be major damage to the condensing unit or it could cause the connecting lineset to break.

Debris: Water may not be the cause of loss if it pushes debris and other foreign objects into the HVAC equipment. This could cause minor to major damage. For example, debris could become lodged in the condenser coil fins. In many cases, the fins can be carefully washed out to remove the debris, but if the fins are flattened too far or are torn, the coil may need to be replaced. Even then, full system replacements are unlikely. However, if water pushes larger or heavier items into the HVAC system, more major repairs may be necessary.

Corrosion: The condenser coil consists of copper tubing covered in aluminum fins that are exposed to the elements that lead to corrosion, particularly saltwater or untreated water that has a low pH value. This can deteriorate the coils and weaken their integrity; however, this would be a sign of long-term damage. Corrosion could also impact indoor ductwork that would require policyholder action.

Mold: Wet ductwork could cause mold or mildew, which could impair air quality and become a health hazard.

Because water isn’t frequently a direct cause of loss and isn’t always a covered peril, it’s critical insurance professionals verify the cause of loss and scope of damage before settling the claim. Often individual components can be replaced to return the HVAC system to pre-loss condition without a full replacement. Don’t add claim leakage to the consequences of water-related damages.